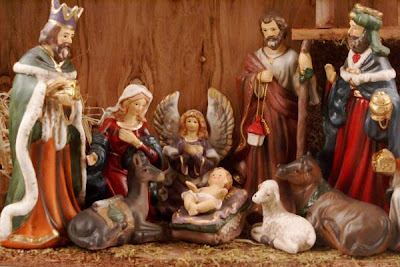 The Pope has written a book.  There is probably nothing unusual in that.  I feel sure lots of past popes have written books, and the present pontiff is noted for his love of the pen, along with just a soupcon of theological controversy.

I rather thought Catholicism was all dogma.  “Oh, don’t be so dogmatic”, I can hear Pope Benedict say in my mind’s ear, “there is always room for a little flexibility in faith.”  There seems to be more than a little room when it comes to aspects of the Nativity.

Christmas approaches with alarming speed.  But Christmas may not be Christmas at all, at least according to Jesus of Nazareth: the Infancy Narratives, a new addition to the Papal back catalogue published last week.  Never mind the season, never mind the month, never mind the day: Jesus was born years earlier than is commonly supposed.  The accepted date was based on a miscalculation by Dionysus Exiguus – also known as Dennis the Small –, a sixth century Eastern European monk.

Dionysus is now best known for the concept of Anno Domini (AD) – in the year of our Lord.  I remember once in a religious studies class, after we had already established what BC meant, we were asked if any of us would care to hazard a guess at AD.  Without pause for thought I replied “After Death.”  “I’ll give you after death”, the teacher said.  I was a bit of a minx, you see.

According to Benny, Dennis was a bit of a menace when it came to dating. We do not know how he calculated the year of Christ’s birth but he got it wrong, perhaps by as many as several years.  Jesus, you see, was born BC; born, in other words, before Christ!  The contention isn’t new; other scholars have made such a claim, now weighted with a papal imprimatur.

My goodness, here is the head of the Catholic Church dealing in doubt.  What next, I wonder?  I’ll tell you what next: the Infancy Narratives has no room in the inn for cattle and donkeys.  The ox and ass did not keep time as the drummer boy played because they were not there.  It’s all a myth, the Pope says.  “There is no mention of animals in the Gospels”, he writes, in what is the third and last part of his biography of Jesus.  The inclusion of domestic animals in the Nativity scene was most likely inspired by pre-Christian traditions.

Not to worry, boys and girls; there will be no Papal Bull ejecting the menagerie, even that set up every year in Saint Peter’s Square.  Even so, it’s as well to remember that it’s just a lot of bull.  So, too, apparently is the singing heavenly host greeting the birth of Christ.  His Holiness writes that the angels did not sing Hark!; they only spoke the words.  Maybe they were crooning.

But when it comes to the really important stuff, when it comes to the Virgin Birth, there is no room for doubt or papal equivocation: this is the literal truth, the dogma upon which the faith stands or falls.  The Pope is insisting on the word of the Gospels and only the Gospels, which ironically aligns him with seventeenth century English Puritans, who, in their own literal way, literally dispensed with Christmas altogether, a pagan festival unsanctioned by scripture.

It seems to me that there is a kind of naïve purity or theological blindness here in an argument that is too subtle by half, and that half concerns the element of myth from which all belief takes succour.  When one removes the myth one removes the magic.  It is the need for this sort of primitive reassurance that moves mountains, not Papal monographs.
Posted by Anastasia F-B at 16:02