A new spectre is haunting …the spectre of spectres!  Alas, no sooner had the country got rid of communism than an even greater danger has appeared - Halloween.  Polish bishops recently urged worshippers to ignore the festival because it “promotes harmful and diabolical behaviour.”

The poor old prelates face a more dreadful challenge.  The battle against communism was easy: there are no laughs in communism; there is no fun.  There is lots of fun and laughs in Halloween, which makes the danger all the more diabolical.  The archbishop of , Kazimierz Nycz, said the festival went against the Church's teaching by promoting "the occult and magic".

The truth is that Halloween, which has become increasingly popular in in recent years, undermines the authority of a church that is becoming as literal-minded and humourless as the old communist oligarchy.

No word from the itself this year, silence perhaps being the best policy.  A few years ago the Holy See was warning parents not to allow their children to dress up, dismissing the festival as a celebration of ‘terror, fear and death.’ So, they are a bit worried then! The message went out in L’Osservatore Romano, the ’s official newspaper, in a piece headed Halloween’s Dangerous Message.

So, what, one asks, is this ‘dangerous message’? Is Halloween not just about having fun and maintaining traditions, ancient traditions? No, it’s not; it’s riddled with a dark current of occultism and is “absolutely anti-Christian.”

Aldo Bonaiuto of the Church’s anti-occult and sect unit said that the event could spurn Satanic sects without scruples. “Halloween”, he continued “pushes new generations towards a mentality of esoteric magic and attacks sacred and spiritual values through a devious initiation to the art and images of the occult. At best it gives a helping hand to consumerism and materialism.”

Let me get this straight: Halloween initiates people into the occult and encourages materialism. So it seems to cover all angles!

No, I don’t take this silliness seriously from an organisation that not so long ago condemned the Harry Potter books and then in its fallibly infallible way changed its mind. Let’s strip away the Satanic nonsense.  Halloween or Samhain is simply an ancient Celtic festival marking the passage of the seasons, one celebrated in Christian and pre-Christian times. It has nothing to do with ‘trick or treat’ or Satanic cults and everything to do with casting light on a dark season.

But the desperation of the Church is understandable because it is largely of its own devising. It’s part of an ancient investment, it might be said, now bearing unexpected dividends. For, you see, I cannot think of a single Christian festival, major or minor, that was not based on the Church’s early usurpation of an older pagan holiday, from Ostara to Yule/Saturnalia. Even St Valentine’s Day was created around the festival of Lupercalia. Christmas Day itself is no more than the old Roman festival of Sol Invictus, the Sun God, whose birthday was celebrated on 25 December.

The simple truth is that as Christian faith falls away these old holidays re-emerge, have been re-emerging for years, partially in their original form, material and celebratory rather than spiritual and introspective.  So remember this when you see yet another jeremiad, as you inevitably will, bemoaning the ‘materialisation’ of Christmas.

I have no idea how Polish Catholics received this latest piece of nonsense, but I rather suspect most will simply ignore it. People will continue to enjoy themselves, to have fun on Samhain or Saturnalia, without fear of the Archbishop of Warsaw, the Pope…or of Satan.

...Burn to me perfumes! Wear to me jewels!
Drink to me, for I love you! I love you!
I am the blue-lidded daughter of Sunset;
I am the naked brilliance of the voluptuous night-sky... 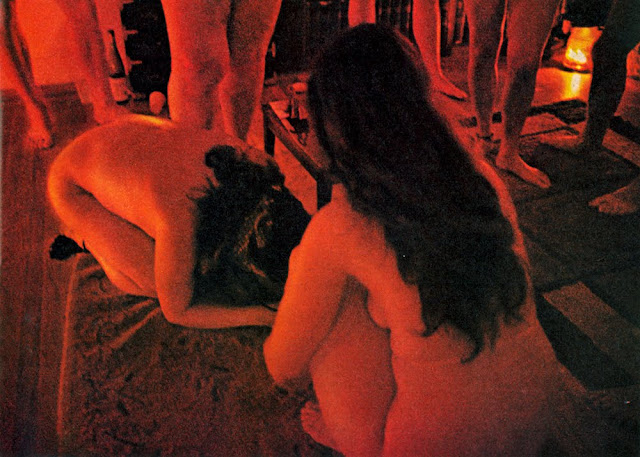