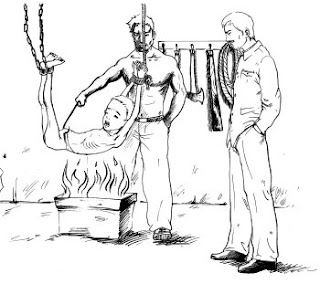 A picture is worth a thousand words, even when that picture is an amateurish drawing. The drawing in question shows a fourteen-year-old boy, stripped naked and suspended above a charcoal fire. He is secured to the ceiling by a rope tied around his wrists and a chain around his ankles. As he writhed in agony away from the flames, he was secured in place by one of his tormentors by means of a steel hook through his abdomen.

The boy’s name is Shin Dong-hyuk. The time is 1996. The place is , a concentration camp, to be more exact. Shin was born there, the product of a casual liaison orchestrated by the camp guards to provide more slave labour. His mother and brother were planning to escape. Debased and dehumanised, he informed the guards of their plans. No matter; he is being tortured to find out how much more he knew; he is being tortured for the pleasure of the torturers. Later, with all of the other inmates, he was forced to watch his mother hanged and his brother shot.

We know all of this because Shin is the only person ever to have escaped from a ‘no exit’ camp. His particular story is now the subject of Escape From Camp 14: One Man's Remarkable Odyssey from North Korea To Freedom In The West, written up on the basis of numerous interviews with the subject by Blaine Harden, a journalist who works for the Washington Post. It invites comparison with Barbara Demick’s Nothing to Envy: Real Lives in , which I reviewed here last year (Envying Dogs, 30 August). I’m going to hold off on this for a bit, though.

For over twenty years Shin knew nothing but hunger, cruelty, torture and callous brutality. This was a kwan-li, a camp for political prisoners from which death was the only mode of egress. When I say ‘political prisoners’ I should make it clear that we are not dealing with forms of ‘dissidence’ that any normal person might understand. This is not the world of Kafka; this is not the world of Orwell; they are far too sane to describe real life in

In 1972 Kim Ill Sung issued an edict, ordering that the sins of the fathers be visited upon the sons and the sons and the sons. In other words, three generations of the same family had to be punished to wipe out the “seed of class enemies.” Whole families, including tiny children, were sent to concentration camps for the most minor of offences. Crimes included not wiping the dust off the portrait of the ‘Great Leader’. Wrong doing, wrong thinking, wrong knowledge, wrong background; it all went in to the metaphysical stew.

The conditions Shin and the others had to face are almost beyond comprehension. The Nazis in their lexicon of death had a particularly sinister phrase – extermination through labour. The North Koreans show commendable zeal in the same process. Inmates in the various camps work fifteen hour days. Inadequately fed, they die of starvation or simple exhaustion.

That is when they are not murdered by the guards. In Shin’s camp there were eight rules which, if infringed, resulted in immediate shooting. Any woman falling pregnant was ‘shot immediately’. This included those who were raped by the guards. I say rape, but there was no crime here; for the guards were at liberty to have sex with any woman they chose, just as they were not at liberty to resist. This is a world without love, without comfort of any kind. Hell could not be so cruel.

It’s a world where Shin saw his first execution at the age of four. The victim had his mouth stuffed with pebbles just in case he tried to say anything ‘unpatriotic’ prior to death. When he was six years old Shin saw a girl of the same age being beaten to death by a prison teacher for having a few grains of corn in her pocket. This is a world where people had so little food that they would pick through cow dung for corn.

Escape from Camp 14 is an important testimony and a harrowing read. Shin’s story is one that needs to be told. There are clearly many other such stories among the estimated 200,000 people who have disappeared into night and fog. If you enjoyed Nothing to Envy you will be moved by this account of blighted lives. I’m reluctant to say anything that might put people off reading. However, as a work of reportage I thought it far less assured than Demick. Stylistically it’s not that engaging. It's repetitive and heavy-handed at points. Above all it is far too self-conscious, the story of Harden as much as Shin.