Robin of the Right 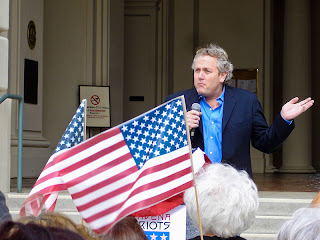 I took exception to the early tone being set, one of minor celebration. Considering that he died at a relatively early age, considering that he leaves a wife and four young children, I described it as despicable and distasteful. There are times when political differences are irrelevant. In response I was given a link to another blog and asked, once I read it, if I would feel the same way. This is part of what I read;

Let’s face facts here; the man was an asshole, fashioned after the many conservative assholes who are currently residing in our media. He was a racist, misogynistic, homophobic elitist bastard, who gleefully attacked the character of anybody who didn’t share his hateful, narrow minded views. He was the model of today’s Republican as featured in our present day media.

What is there to say? If that’s the level to which criticism and discourse has sunk in the States then things really are in a bad way. It seems the justification for this kind of venom was Breitbart’s own invective. Soon after the death of Senator Edward Kennedy he described him as “villain”, a “duplicitous bastard”, a “prick” and “a special pile of human excrement.” The favour has now been returned, with one Kenneth J Bernstein greeting Breitbart’s death using the same terms in a diary entry on the Daily Kos, seemingly an American political blog that publishes ‘progressive’ (how I loath that word) views.

I actually wrote my own obituary on Edward Kennedy, published at the time of his death on the Daily Telegraph readers’ website. It took the form of some musing by Sir Mordred, the rebel knight at the court of King Arthur (Sir Mordred Reflects on the End of Camelot). Here is part of his, sorry, my reflection;

So on to Ted, the last of the ‘great’ senators and the clan’s weakest link. I suppose he deserves the accolade of greatness simply for being around long enough, the Methuselah of the upper house. And what a variety of super liberal and semi-socialist causes he embraced, making lots of sound and fury in the process that signified nothing. Was it enough to wipe away the shame of Chappaquiddick, the shame of leaving a nineteen-year-old woman to drown while he made his escape, the shame of failing to report the incident for hours after? For some it seems to have been, for Super Obama it seems to have been, but not for Mordred; no, never.

There is other evidence of Ted’s turpitude beyond Chappaquiddick. The older Kennedys’ extra-marital exploits escaped press scrutiny a little in the same fashion as royals did at the time, but Ted lived long enough to see the emergence of a much less deferential age. His exploits were a dream for his Republican opponents. In 1988 in a speech on the Regan administration’s secret deal to sell arms to Iran he asked rhetorically “Where was George Bush?” The reply was made on bumper stickers across the land, “Dry, Sober and Home with his Wife.”

Am I speaking ill of the dead? I suppose I must be, but so much ill was directed at me by poets down the ages; so please allow me some return. Even so, while I welcome no one’s death I do welcome the end of a shabby modern Camelot, a tawdry illusion so much worse in every way than the original; an illusion that served to poison America with the lie of liberalism and the lie of socialism.

In other words he was a villain, a duplicitous bastard, a prick and a special pile of human excrement! But I’m not American; I don’t express myself in such earthy terms. Breitbart did, though his faults are nothing compared with those of the tawdry Kennedy.

On the basis of some very brief research I’ve concluded that there was so much to admire in his approach to life and politics. He wasn’t a knight at Camelot; no he was Robin Hood, fighting against the barons who dominate American life.

Time Magazine referred to him as the internet’s “most combative conservative impresario”, which seems to have been a well-deserved accolade, one I feel sure that made him proud. A champion of the Tea Party and baiter of Obama (he described him as Marxist in an interview with the New York Times), he set up conservative websites like Big Government, Big Journalism and Big Hollywood, the three areas of American life which he considered to be dominated by a liberal elite, unreflective of the views of ordinary people.

In an interview with Time he said “Most conservatives are individualists. For years, they have been pummelled by the collectivists who run the American media, Hollywood and Washington. The underground conservative movement that is now awakening is the ecosystem I’ve designed my sites to tap into.”

As I said, a modern Robin Hood of the right, fighting against the vested interests that would silence any view but their own. Yes, he was brave guerrilla, tackling the awful orthodoxies that dominate so much of our life, not just in the States but in Europe also, where the ghastly and unrepresentative bureaucracy in Brussels smothers dissent with silence.

Even if his weapons are not my weapons, his words not my words, I can recognise a fellow rebel. I regret not knowing of him when he was alive. John Donne’s poem For Whom the Bell Tolls comes to mind. We are, indeed, diminished by our loss. But the words I want to conclude with are those of the first respondent on the Telegraph article reporting Breitbart’s death;

Now, we shall see the CLASS of friends and foes. I wish I could say that I expect to witness respectable decorum. But I know, as Andrew would, it simply won't be. The left has divided our people into warring camps. They will rejoice at our loss. So be it. This is a body blow to conservatives, no doubt about it. Time to offer prayers to friends family and to remember him for energy, brilliance and focus. Time to pick up the flag and soldier on.
Posted by Anastasia F-B at 15:56