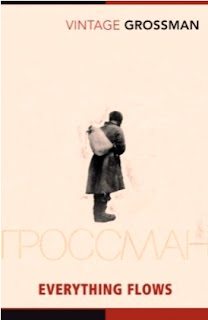 Vasily Grossman, as I wrote here quite recently, was a writer of unique genius, a great war correspondent and an even greater novelist. Earlier this year I read Life and Fate, a panoramic novel set in the Second World War. I don’t think I’ve ever been as overwhelmed by a work of fiction, at least not since I read Dostoevsky’s Crime and Punishment. It’s an astonishing tour de force, a description of people and places and events delivered with freshness and stunning insight. Even before I finished I offered the following comment;

Sadly Grossman was unable to enjoy his literary triumph: he died of stomach cancer in Moscow in 1964. At the point of his death he had no reason to suppose that Suslov’s prediction was not true, that it would take two centuries for his great work to emerge from the ideological shadows. But he was already working on another novel, a novel that could not have been published in the old Soviet Union in two millennia, never mind two centuries. This is Everything Flows, which I finished today in one feverish sitting, stopping only to top up my tea from the samovar.

Yes, Everything Flows is a novel, unfinished at the time of the author’s death, but it’s also a kind of testament, a political and philosophical indictment not just of the moral corruption of communism but of Russia itself, of that dark place in the Russian soul that forever eschews freedom in favour of slavery.

The criticism is trenchant. Life and Fate could be taken in large part as a demolition of Stalinism, an altogether more honest testament that Khrushchev’s Secret Speech. But Everything Flows goes deeper; it goes so far as Lenin, still sleeping away in Red Square, the supreme icon of national servitude. For a moment, for the briefest of seasons in the spring of 1917, Russia scented freedom. The path lay open. Russia chose Lenin, who came not to liberate the country but to refine and amplify the most regressive features of its history;

And so it was that Lenin’s obsession with revolution, his fanatical faith in the truth of Marxism and the absolute intolerance of any dissent, all led him to advance hugely the development of the Russia he hated with all of his fanatical soul…Did Lenin ever imagine the true consequences of his revolution? Did he ever imagine that it would not simply be a matter of Russia now leading the way – rather than, as had been predicted, following behind a socialist Europe? Did he ever imagine that what his revolution would liberate was Russian slavery itself – that his revolution would enable Russian slavery to spread beyond the confines of Russia, to become a torch lighting a new path for humanity?

Russian history, paradoxically, went into reverse. Stalin quickened the process, taking it as far as it would go, substituting freedom with the most abject forms of state worship, something that had not been seen since the days of Ivan the Terrible. By the 1930s, the time of collectivisation, the time of the Terror Famine, the time when the state deliberately starved millions of its own citizens to death, the Russian peasantry was more completely enslaved than it ever had been under the Tsars. It’s almost as if Alexander II, the Liberator, the man who ended serfdom, had never lived. That was the legacy of the Revolution.

There is a witness here, a man who filters these thoughts through his head. He is Ivan Grigoryevich. His freedom died earlier than most. Sent to the camps as a young man, he returns thirty years later, a ghost from the past, a husk of a ruined life. Stalin is dead but there has been no proper reckoning; there never will be a reckoning. Such reckoning as there is comes only as an act of moral and historical reflection.

There are those that Grigorivich left behind, like his cousin Nikolay, a mediocrity who prospered in a time of mediocrity and bad faith. This ghost is not entirely welcome, neither by Nikolay nor by his wife, both of whom remained ‘free’ insofar as freedom involved all sorts of shabby compromises. This is a theme, this guilt come resentment, that Solzhenitsyn was to take up in Cancer Ward. These are the little people, the beetle people, who prospered at the expense of those far more talented, who died or disappeared.

The novel ranges over some of the tragedy, looked at in simple human as well as grand historical terms. There is the tragedy of the Terror Famine, told by Anna Sergeyevna, Grigorivich’s lover, full of guilt for the part she played;

There is the tragedy of Vasily Timofeyvich, Ganna, his beloved wife, and Grishenka, their infant son, explored in a brief and incredibly poignant chapter, killed by starvation, lying in their hut over the winter, not separated even by death.

There is the tragedy of Masha, arrested in 1937 at the height of the Great Terror, madness within madness, simply for being married to a man that the state had declared guilty. Separated from her husband and her child, she was sent to the gulags, convinced that it was all a mistake, that her sentence would be revoked, that they would all meet again never to be separated. In the end hope died;

A year later Masha left the camp. Before returning to freedom, she lay for a while on some pine planks in a freezing hut. No one tried to hurry her out to work, and no one abused her. The medical orderlies placed Masha Lyubimova in a rectangular box made from boards that the timber inspectors had rejected for any other use. This was the last time anyone looked on her face. On it was a sweet, childish expression of delight and confusion, the same look as when she had stood by the timber store and listened to the merry music, first with joy then with the realisation that all hope had vanished.

This could have been an angry book, a bitter one; the anger caused by so much betrayal, the anger of history, the anger of an author whose life’s work had been frustrated. But it’s not; it’s a bold, moving and scrupulously honest book, a story told on a number of narrative levels, a story told with simplicity, insight and tremendous clarity. It stands as a noble testament. If you love Russia, if you love the past, if you love the truth, if you love freedom I urge you to read this. If you can do so without descending at points into tears then you have far greater powers of emotional control than I have, than I will ever have. Everything Flows is a great work of literature. It is an even greater tribute to the human spirit.
Posted by Anastasia F-B at 16:30