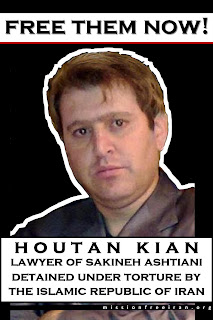 It’s over a year now since I first wrote about Sakineh Ashtiani, the Iranian woman sentenced to death by stoning for alleged adultery (Evil Law – 30 August, 2010). She’s still in prison though it seems unlikely that the sentence will ever be carried out, insofar as it’s possible to predict the actions of the vile clerical-fascist Iranian regime. The truth is that it has been sorely embarrassed by the international reaction to this barbarism, embarrassment that opens the door to another story about injustice and oppression.

It’s a universal principle of justice that people accused of crimes have the right to an effective defence, and I place the stress here on effective as opposed to some tame lawyer, who acts as an adjutant to the prosecution. Ashtiani’s lawyers had the courage to defend her to the best of their abilities, the reward for which has been torture and exile. Now the lawyer defending one of her lawyers has been forced to flee for his life.

Safe in an unnamed location in Turkey, Naghi Mahmoudi recently told the Times of the plight of his client, Javid Houtan Kian, formerly the junior barrister on Ashtiani’s defence team. The details are quite chilling. Even if Kian was released today, his lawyer said, “he would never be able to return to normal life because he’s suffered so much physical and mental torture.”

Although Mahmoudi agreed to represent Kian at the beginning of the year, it took several months of pleading before he was allowed to visit his client, being held in the prison at Tabriz. His reaction on seeing him was one of shock: Kain’s teeth had been smashed, his nose broken and his hands and feet showing signs of cigarette burns.

During the three hours the two were allowed together, always in the presence of a guard, Kian compiled a three-page description of the treatment he had received. He was beaten by up to twenty men at a time, as well as being doused in water and left in the freezing courtyard on winter nights. It’s not just his hands and feet that been burnt with cigarettes but also his genitalia.

No sooner had the interview concluded, with Kian pleading that Mahmoudi tell the world of his plight, than the transcript was confiscated by the prison governor, saying that it was all lies. The lawyer was also banned from returning to the prison, though he subsequently learned from others that his client’s condition had deteriorated still further.

Ever fearful for his own safety, and living under constant petty harassment, Mahmoudi decided he had to leave when he received a demand that he present himself at Tabriz, not even pausing to say goodbye to his mother. From his Turkish refuge he said “Lawyers have to defend people however dangerous the situation.” The danger reaches a unique level when the government abuses them merely for doing their job – “It’s a terrible and frightening regime. It doesn’t believe in the law or anything. The only thing they think about is keeping power.”

There is no law in Iran, there is no justice; there is no God, rather ironic when one considers that this is a country that conceitedly refers to itself as an ‘Islamic Republic’. It’s nothing of the kind; it’s the Republic of Iblis, the Republic of Death.
Posted by Anastasia F-B at 15:46