The Weight of History 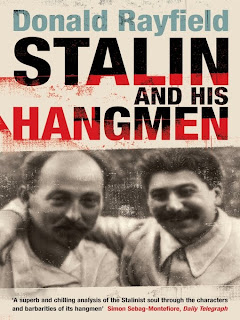 I bought Donald Rayfield’s Stalin and his Hangmen six or seven years while I was studying modern Russian history in sixth form at school. I never read it, though, because it was squeezed out by another book published at about the same time – Stalin: the Court of the Red Tsar by Simon Sebag Montefiore.

My present fascination with the writing of Vasily Grossman persuaded me to turn to the long-neglected Raysfield for some additional background information on the nature of the Soviet state and the terror apparatus it spawned. I’m rather glad I did because this is a good book, though not a great one, a reasonably through treatment of the people and the institutions without whom Stalin could not have functioned in the way that he did.

It’s a set of mini-biographies, or perhaps pathologies is a better expression, of Stalin himself and the successive heads of state security, appointed after the Bolshevik coup in late 1917. They are there in all of their fanaticism and depravity.

Imagine, if you will, some kind of reverse Darwinian progression, with successive stages of moral, sometimes physical, degeneration. Imagine also a progress in inhumanity and cruelty that is a perfect echo of the progress and inhumanity of communism at large. Now picture the men; picture Felix Dzerzhinsky, the founder of Cheka, the first in a long line of sinister acronyms, and then those who came after: Viacheslav Menzhinsky, Genrik Yagoda, Nikolai Yezhov and Lavrenti Beria. These are the principal players, though the book also features some of those spawned in their shadows, even deeper levels of ugly depravity.

It’s also a biography of the institutions themselves and their evolution, from Cheka, to GPU, to OGPU, to NKVD, to MGB, to the FSB of today. These awful acronyms both display and hide so much. They are the cords in a binding wrapped ever closer around the body of Russia, tighter and tighter, as freedom was squeezed to death. The awfulness was there right from the beginning in the system created by Lenin; Stalin simply made it even worse, with the aid of his various hangmen.

I knew more about some of the men featured in this book than others, quite a lot about Dzerzhinsky, who, if he had survived, would almost certainly have gone the same way as Yagoda and Yezhov, men who supped too close to the devil, and nothing at all about Menzhinsky.

I thought of Yezhov, who presided over the hysteria of 1937 and 1938, which we now know as the Great Terror, as the individual with most blood on his hands, but the weight is heaviest on Menzhinsky, head of the OGPU at the time of forced collectivisation and a state-induced famine that lead to the death of millions. There is genocide here, ethnic-cleansing before the world had ever heard of ethnic cleansing. The urban terror, the Yezhovchina, of 1937 to 1938 was bad, but the rural terror of 1930 to 1933 was even worse.

Rayfield tells his story well, scholarly but with a strong seasoning of passion, though I do have serious reservations over some of his more dubious judgements. In Murdering the Old Guard, section six of the book, he says that Stalin was no more a communist than a Borgia pope was a Catholic. That’s a rather odd contention because the Borgia pope – I assume he is thinking of Alexander VI – was a Catholic, just as Stalin was a communist. The difference is the one was an aberration of a system of belief and the other its most refined expression. More seriously, I think his analysis of Stalin’s relations with Hitler both weak and seriously inaccurate at points, showing that his grasp of the twists in Soviet foreign and ideological policy is not quite as strong as it should be.

The conclusion, though, is superb. As he says, it is a paradox that Russia’s two greatest novelists Dostoevsky and Tolstoy in all their work insisted that only by full confession could the crimes of the past be absolved and life become endurable again – “…yet today’s Russian state refuses to abjure Stalin and his henchmen.” Hardly surprising when that same state is run by a man who is by career and choice, as the author puts it, a successor to Yagoda and Beria, a state where “..the FSB has taken, in alliance with bandits and extortioners, the commanding heights of the country’s government and economic riches, and goes on lying to, and when expedient murdering, it’s citizens.”

How much worse the situation seems to have become since I bought this book, how much Russia moves in an ever downward spiral, crushed under the weight of its unrequited history;

Until the story is told in full, and until the world community insist that the legacy of Stalin is fully accounted for and expiated, Russia will remain spiritually sick, haunted by the ghosts of Stalin and his hangmen and, worse, by nightmares of their resurrection.
Posted by Anastasia F-B at 16:26