A Lesson on Smugness 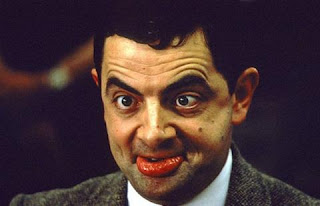 Last month the Sunday Times Magazine carried an interview with Rowan Atkinson, the comedian and rubber-faced gurner (from the verb ‘to gurn’; go on, look it up; it’s even on Wikipedia!), which I quickly read and just as quickly forgot. I’m not a fan of Mr. Bean, I never have been; there is too much of the holy playing-the-goat about the man, or, maybe, just the goat.

I did, however, take note of his comments on Church of England vicars, people he’s rather fond of parodying;

I used to think that the vicars I played, or the exaggerated sketches that were written about clerics, were unreasonable satires on well-meaning individuals but actually, so many of the clerics that I've met, particularly the Church of England clerics, are people of such extraordinary smugness and arrogance and conceitedness who are extraordinarily presumptuous about the significance of their position in society…I believe that all the mud that Richard Curtis and I threw at (vicars) through endless sketches that we've done is more than deserved.

Well, there you are. Do I feel obliged to defend hard working clerics from Atkinson’s scatter-gun? No, not really; I’m sure they can defend themselves much more effectively than I. I don’t feel the need to say anything about them but I do need to say something about smugness, the smugness of millionaire comics.

You see, there are clerics and there are clerics. If you are familiar with Anthony Trollope’s Barsetshire series of novels, a chronicle of high and low politics in the nineteenth century Church of England, I feel sure you will remember the self-effacing Septimus Harding, just as you will remember the oleaginous Obadiah Slope. Of these two Atkinson for me is more of a Slope than a Harding, more of a self-promoting and pompous hypocrite than a man of simple emotions and sincere beliefs.

Yes, I can see Slope driving a $3million sporstcar, just as Atkinson does, or rather did, before he and it had an encounter with a tree in Cambridgeshire last month. But would a clerk in holy orders attempt to raze a decent house in Oxfordsshire and build a glass and steel carbuncle in its place? His neighbours are not at all pleased. Still, they have nothing to fear, he said, from “modern design”. Perhaps not, and I dare say they are a lot safer now that the Atkinson-mobile has been put out of commission.

So, here is a man living and lording in a fashion that most Church of England priests could never envisage, people who, as the Spectator said in a recent editorial, live humbly and dedicate their ministry to the lives of others without expectation of reward. Not so the profane goat, who feels able to comment in a wholly presumptuous, arrogant, smug and general way about clerics, regardless of their actual merits or demerits. Perhaps, considering the wealth he has made from his parodies, some kind of tithe might be in keeping, really just as a form of compensation, or as a tax on the mouths of self-righteous prigs.
Posted by Anastasia F-B at 16:21