I judge therefore I am 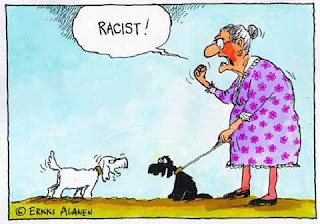 This is my response to a discussion on Blog Catalogue, under the heading “We are all racists”, the proposition being that we automatically judge people who are different from our own ‘tribe.’ My remarks are addressed to the poster.

I don’t suppose that you’ve ever heard of Enoch Powell, a British politician once almost universally condemned, even by his own Party, as a ‘racist’ because of his famously infamous Rivers of Blood speech, in which he gave warning of the possible effects of mass immigration. He was once asked in a television interview with David Frost if he was a racist, to which he replied;

It depends on how you define the word “racialist.” If you mean being conscious of the differences between men and nations, and from that, races, then we are all racialists. However, if you mean a man who despises a human being because he belongs to another race, or a man who believes that one race is inherently superior to another, then the answer is emphatically No.

So, yes, by the first definition, I, too, am a racialist. I agree with the argument put forward in your post that we are all racialists to that extent. Beware always of the small-minded and stupid here; for all too often their denials of racism disguises the fact that they are racist in the second sense of Powell’s definition, a form of psychological compensation for their own worthlessness.

Where I differ from you is over the question of skin colour. I do not believe that there is a ‘black race’ any more than there is a ‘white race’. If I judge people it’s most often a cultural reflex rather any on the basis of deductions made on the basis of skin colour. If I entered an underpass and saw that the exit was blocked by a gang of youths it would make no difference at all to my level of apprehension if they were white or if they were black.

Did you ever see Crash, the 2004 movie directed by Paul Haggis? It’s really quite clever, exploring race prejudice on a whole number of levels, not just the obvious ones. Here, in London, some of the worst racism is not white on black, but black on black, with people from the West Indies hating people from Somalia.

There is also the wider question of prejudice, which can overlap with racial perceptions, though not always. I admit my own shortcomings here: I dislike gypsies because I have seen how gangs of East European Roma operate in London. They have no place here; I don’t want them; I don’t know anyone who does. Less specifically, I dislike fat people and I dislike the stupid, probably the first more than the second, because they have the power to do something about their affliction and chose not to. See; prejudgement in the purest sense!

We live in a complex world, too complex, in so many ways, to be taken in without forms of mental categorisation. I judge therefore I am. :-)
Posted by Anastasia F-B at 16:19