Il Duce and the Naked Princess 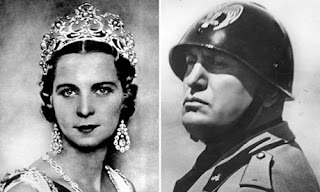 There is a scene in Nixon, the biopic directed by Oliver Stone, recording the former president’s historic trip to China, accompanied by Henry Kissinger, then Secretary of State. During an interview with Mao Zedong, Kissinger, whose reputation clearly travelled ahead of him, was pointedly asked how a fat man like him got so many women, rather ironic considering what we now know about the appalling red hypocrite. “Power, Mr Chairman”, he responded, “is the ultimate aphrodisiac.”

I was reminded of this on reading recently about the sexual conquests of a fat, short and bald man – Benito Mussolini. These included Claretta Petacci, almost thirty years younger than Il Duce, loyal enough to join him in death. But now comes a surprise: evidence has been uncovered claiming that his mistresses also included Marie Jose of Piedmont, wife of Umberto II and the last queen of Italy.

There were certainly rumours of a relationship in the 1930s, when the Belgian-born Marie was still the crown princess. Evidence of a kind, I suppose, was provided by Petacci herself, who recorded in her diary that the princess made an attempt to seduce Mussolini, even swimming naked in his presence, which, so he assured his mistress, he found “repulsive.” Yes, sure.

The new evidence, if it can be considered as evidence, is really not that much more substantial. It comes in a letter from Romano, one of Mussolini’s sons, to Antonio Terzi, the former deputy editor of the newspaper Corriere della Sera. Although written forty years ago it was only recently published in an Italian magazine. For some reason it was never used by Terzi, now dead, and only discovered when his own son was searching through his archives. In this Romano writes;

I can in good faith confirm that often in our house the relationship between my father and Maria Jose, both political and romantic, was spoken of, I can tell you with sincerity that my mother was considerably more explicit – between my father and the then princess of Piedmont there was a brief period of intimate relations, which I believe was then called off by my father.

All I can say is that the relationship may indeed have been ‘spoken of’ but this is just another rumour rather than conclusive proof. Besides the suggestion that there was a ‘political relationship,’ along with the romantic, tends to undermine the document’s credibility. Almost alone among the royal family, Marie was always sceptical of both Mussolini and Fascism. During the Second World War she was an important conduit between the Allies and the Axis power, a British diplomat going so far as to describe her as the only member of the royal family with sound political judgement.

Although this letter may enhance still further Mussolini’s reputation as a sexual predator, just it traduces the good name of the late Marie Jose, it adds nothing to our understanding of the man or the times. It may, though, just add a little to our understanding of the political psychology of a country which rather admires leaders with a certain macho reputation. How else does one explain the ability of Silvio Berlusconi to survive sexual scandal after sexual scandal, even so far as a certain Ruby the Heart Stealer? But that’s another story altogether! (Oh, if you must know Google this – Bunga Bunga and the Heart Stealer.)
Posted by Anastasia F-B at 15:28