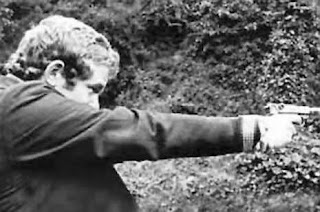 In June of last year I wrote an article for the Daily Telegraph reader’s blog site, one headed Machine Gunn McGuiness – it’s time for some answers. It was written in the wake of the Saville Inquiry into the events of Bloody Sunday in 1972, when a number of people were shot dead by the British Army in Londonderry.

The Parachute Regiment was held to blame for that tragedy, but the responsibility was also thrown obliquely on Martin McGuiness, the public face of Sein Fein/IRA, a man for whom I have nothing but the deepest contempt. I concluded my piece with the following remarks;

There are, however, some more immediate questions to be answered by a man now in government in Northern Ireland; there are questions to be answered by Martin McGuiness, Deputy First Minister. The dead of Londonderry had to have their day and David Cameron was right to make the statement he did in Parliament. But that day has passed. Now I hope the Tory back-bench will ask some pointed questions when Saville is subject to more detailed scrutiny. Was it, perhaps, the custom, I have to ask, to walk around with sub-machine guns in Northern Ireland? Was McGuiness giving it some air or intending to practice for a knee capping or a dozen? It really is time for some toughness here, time to make Machine Gun McGuiness smirk on the other side of his face.

Not only is this man still smirking but he is attempting to smirk his way into the office of president of the Irish Republic in an election to be held towards the end of this month. But everywhere he goes he is followed by his own legacy, a legacy of IRA violence. This is a man who was imprisoned twice in the 1970s for membership of this terrorist organisation, the first time after being caught near a car containing 115kg of explosives and 5000 rounds of ammunition. And as the Saville Inquiry concluded, he was likely armed with a Thompson sub-machine gun on Bloody Sunday and probably used the weapon. He and his kind certainly contributed to the tensions which lead to the shootings.

He says he left the organistation in 1974, but as a recent Times report concluded, few believe this to be true. All the evidence suggests that he went on to become the IRA’s northern commander and the head of its army council. There are atrocities thereafter that he certainly knew of or approved, like the 1987 Remembrance Day bombing

Thankfully he is pursued by his murderous legacy even in the Republic, where people generally might be inclined to be more sympathetic. In Athlone he had an encounter with the son of an Irish soldier, who’s father was killed by the IRA in 1983, demanding to know who was responsible. Another uncomfortable encounter followed with the brother of an Irish policeman, killed in County Meath in 1984, who accused McGuiness of having his "family’s blood on his hands." The sister of Mary Travers, shot dead in Belfast in 1984, called his campaign "an insult to the victims of the IRA."

And so it is, to all the victims of the IRA, north and south of the border, north and south of the island’s religious and political divisions. He offers the usual weasel evasions, saying that he never killed anyone himself but refusing to say if he ordered others to kill. He says that he cannot remember the oath he took on joining the IRA. And if you believe that you will believe anything.

He is a liar, a coward and a killer, of that I have not the least doubt, one who hides behind the worst kind of hypocrisy and dissimulation. The past cannot be discarded, the past of a man like this, which he carries around his neck like a curse, the same curse as the Ancient Mariner.

Ah! well-a-day! what evil looks
Had I from old and young!
Instead of the cross, the Albatross
About my neck was hung."
Posted by Anastasia F-B at 15:48