Obama and the American Nightmare 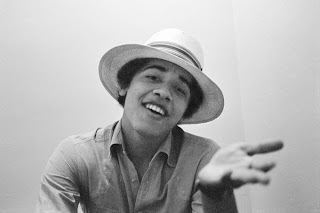 In responding to a question on whether or not Barack Obama had shown great leadership I wrote as follows;

I think he is the worst, least competent, president in American history, an accolade I once awarded to James Buchanan but have since changed my mind. I think the buck stops everywhere but the Obama House. I think he shames the free world, which has long expected a lead from Washington, with his stunning incompetence. I think his capacity for high office is zero and counting downwards. I think he is a crypto-Marxist who has created a poisonous ideological atmosphere in the States, standing over a house divided almost as badly as it was on the eve of the Civil War. Do I think he has shown great leadership? Why, of course.

Taking out that final twist of irony that is exactly what I think. I could say that Obama was responsible for America’s present malaise, but he’s really too little a man for that, an individual of no real historic significance, beyond being the first black face in the White House. No, he is more of a symptom of a disease than the disease itself.

The nature of that, the nature of the disease and its pathology, I am really finding quite difficult to determine. But there is America, a crypto-Marxist as chief executive, an America whose business seems to be anything but business, an America where people can gather in one of the nation’s leading cities, decrying the very capitalism and enterprise which made it great in the first place. There, in New York, are the socially and politically suspect, playing at being Arabs, desperados in search of doles, the antithesis to everything that America represents, as bad, in their own way, as the communists and anarchists of the past.

I’m a historian; I like to draw parallels with the past. Every Empire declines, some more rapidly that others, but who would have believed that the American decline would have been so rapid. It’s just over twenty years since the collapse of the Soviet Union, which left the United States, Ronald Reagan at its head, as the preeminent power on the earth, the victor in the Cold War. It was the occasion for The End of History, Francis Fukuyama’s premature celebration of all that was good and true and noble.

Now here we are, here America is, in retreat across several fronts. It took Rome four hundred years to travel from the zenith of Augustus to the nadir of Honorius. It has taken America a mere twenty to go from the hopes of the age of Reagan to the mediocrity of the age of Obama.

Yes, Obama is a symptom; he’s not the cause, but his own weakness and incompetence has compounded the many problems confronting the nation. There is nothing inevitable here. The problems are bad but they are not intractable. The will and the vision are needed to overcome them; simple determination is needed, the ability to do what is necessary.

I take this point, this present time, to be the trough of American history. There is a way up but only when Obama is in the past, only when American can see this weak, incapable and fatuous man was the wrong choice at the wrong time. With a man like this history never provides a right time. Big, meaningless and windy speeches, head turning this way and then that, that’s the only trace that Barack Obama will leave behind, a silly and insincere voice in the depths of the American nightmare.
Posted by Anastasia F-B at 15:40