Treason by any other name 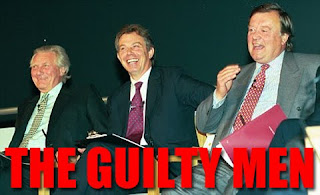 In July 1940, while Britain was in deep in the darkest valley of the Second World War, a coruscating polemic appeared in print. This was Guilty Men, an attack on the forms of appeasement pursued since 1930, which had brought the country to this pass in its history. The author, one ‘Cato’, focused on a number of named politicians, headed by Neville Chamberlain, the former prime minister.

It was actually the work of collaboration between three people, including Michael Foot, a journalist and left-wing fire eater. There is a slight whiff of hypocrisy here, in that Foot, a future leader of the Labour Party, was himself a ‘guilty man’, opposing British rearmament in the 1930s. But the book still went a long way to demolishing the kind of dangerous political consensus that occasionally descends on even the most mature democracies, a consensus supported by ‘official’ news channels like the BBC, portraying critics of the prevailing orthodoxy as crackpots, outsiders and eccentrics.

Now a new Guilty Men has appeared. It’s a polemic no less important at this point in our history than its predecessor. As we look at the debacle in Europe, as we look at a crisis that was utterly and banally predictable over the euro, the one size fits all currency, the time has come to expose the guilty people, the guilty institutions, and the guilty publications who would have involved this country in the whole wretched fiasco, who saw our membership as the only course, as a foregone conclusion that only the mad opposed. We have a new ‘Cato’ collective, less coy than the first; we have Peter Oborne and Frances Weaver, whose devastating critique was published at the end of last month by the Centre for Policy Studies.

It premiers with an observation that I, for one, consider to be almost axiomatic;

Very rarely in political history has any faction or movement enjoyed such a complete and crushing victory as the Conservative Eurosceptics. The field is theirs. They were not merly right about the single currency, the greatest economic issue of our age – they were right for the right reasons. They foresaw with lucid, prophetic accuracy exactly how and why the euro would bring with it financial devastation and social collapse.

And how! This is a crisis that is set to run and run, as more and more German wealth is poured into a Greek black hole. Even on the sidelines we, as nation, cannot avoid the fallout from this financial and political lunacy.

Financial lunacy, yes, exactly, lunacy, as the authors of Guilty Men point out, that was supported for so many years by the Financial Times, a paper that pretends to be the leading economic publication in this country, with the emphasis now very firmly on pretends. It’s salutary to recall what this publication said of Greek entry into the euro in January 2001 – “With Greece now trading in euros few will mourn the death of the drachma. Membership of the eurozone offers the prospect of long-term economic stability.”

One by one the authors pick out their targets, covering them with withering fire, from the Confederation of British Industries, an interest-group that seems to represent the interests of its own conceited bureaucracy best, to the Marxist-dominated BBC, an organisation which has nothing to learn from Dr Goebbels when it comes to the techniques of propaganda.

Betraying every principle of its charter, the BBC became a partisan player in the whole debate over Britain’s fiscal future. Programmes supposedly objective in content were heavily weighted in favour of comment from Europhiles. The pro-euro position was identified as the centre ground, the inference being that its opponents were outside reasonable limits, in the wilderness of political extremes.

Rod Liddle, at the time editor of the Beebs’s Radio 4 Today programme, said “The whole ethos of the BBC and all the staff was that Eurosceptics were xenophobes and there was the end of it. The euro would come up at a meeting and everybody would burst out laughing about the Eurosceptics.” He was even told in a meeting with one of the Corporation’s senior figures that he had to understand that “these people are mad.”

Who laughs now, I wonder; who now calls them mad?

There are named individuals among the guilty, a menagerie of has-beens, never-have-beens and loony tunes. These are my sentiments, alright, but they are not my words. No, they are the words of Andrew Rawnsley writing in the Observer in January 1999. There is only one small difference: his menagerie of has-beens, never-have-beens and loony tunes were the people who were warning that the euro was a foredoomed project.

Who were the people he described as ‘substantially sane’, you may wonder? Well, the wretched shower included Tony 'the Liar' Blair, Peter ‘Gay Lord’ Mandelson, Ken ‘Fatuous Belly’ Clarke, Michael ‘Judas’ Heseltine and Charles ‘the Soak’ Kennedy. Yes, that was his coalition of the ‘normal’.

I don’t like to go too far, but I am angry, angry at these guilty men, an anger which sees forms of treason in the way that they attempted to undermine the best interests of this country. I sincerely hope that future generations view them with as much contempt as the original appeasers, who, for all their faults, simply represented a national mood. What mood the new appeasers represented, beyond their own purblind venality, I have yet to determine.

If you enjoy watching fish wriggle on a hook, if you enjoy hubris brought low, if you enjoy shouting ‘I told you so!’ you will love Guilty Men.
Posted by Anastasia F-B at 15:49