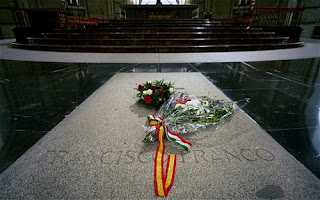 I noticed from a report in the Times that there are plans to move the body of Francisco Franco, the one-time dictator of Spain, from its present position in the basilica in the El Valle de los Caidos - Valley of the Fallen – near Madrid. The former ruler is an embarrassment to the brave new Spain that has a tired old socialist government headed by Jose Zapatero in it.

A commission has been set up to decide if he should be exhumed prior to re-interment in the capital’s El Pardo cemetery. It will submit its report after the general election, scheduled for 20 November, which just so happens to be the anniversary of Franco’s death in 1975. With the right-wing Popular Party expected to win, the suspicion is that the possibility of a corpse eviction has been leaked; that – in combination with the electoral date itself – there is a subliminal message here: a vote for the right is a vote for Franco. Even those who have campaigned for justice for the victims of Franco accuse the government of using the mausoleum for electoral ends.

Meanwhile the decrepit relics of the International Brigades are set to gather in Madrid to commemorate the seventy-fifth anniversary of the formation of armed units that would have handed Spain to Stalin. One of these dinosaurs is quoted in the Times, saying that he fought because “he believed in democracy” and that “these things are still important to me and the Spanish today. There are still fascists who are against democracy.”

Yes, well, maybe there are, just as maybe there are some still around who remember the Barcelona May Days of 1937, when the communists and the NKVD, the Soviet secret police, demonstrated their enthusiasm for ‘democracy’, events that George Orwell wrote about in Homage to Catalonia.

In the light of hypocrisy and body snatching I have decided to reinter one of my corpses, a piece I wrote on the thirty-fifth anniversary of the Caudillo’s death. Here it is, slightly updated. Hold on to your hats!


Friends, Romans, countrymen, lend me your ears; I come to praise Caesar, not to bury him. The evil that men do lives after them, the good is oft interred with their bones. So it was with Caesar…so it has been with Francisco Franco, one time regent of Spain, one time Caudillo de España, por la gracia de Dios. This year marks the thirty-sixth anniversary of his death, and while the left-wing junta that governs Spain today has done its best to wipe out his memory, removing the last statue from Madrid in 2005, its time to say a word or two his favour.

General Franco happens to be one of my political heroes. There, I’ve said it: I’m a fascist. No, I’m not, but, then, neither was Franco. He was conservative, deeply so, part of a Spanish tradition of conservatism going right back to the early nineteenth century. It was his task, as he understood it, to preserve Spain, to preserve Spanish traditions, to preserve Christian civilization, to defend it against the communist subversion of the Popular Front.

I’ve said this before but it bears repeating: the Spanish Civil War is one of the least understood conflicts in modern European history, a source of left-wing mythology, evidenced by Ken Loach’s tedious movie (did he ever make a movie that wasn't tedious?) Land and Freedom. The war was not a simple struggle between left and right, between workers and ‘fascists’. It was a complex event best understood in the context of Spanish history as a whole rather than set against contemporary events in the rest of Europe. The red-beret of the Requetés, the Carlist militia, a movement that harmonises so well with my own romantic and royalist vision, was just as important in the Nationalist camp as the blue shirt of the Falange.

In the end the Falange, the ‘fascists’, if you prefer, though there were major differences between the Spanish and the German and Italian versions, were no more than an ideological and ceremonial gloss on Franco’s conservative dictatorship.

With the likes of that Stalinist apparatchik Dolores Ibárruri, the appalling La Pasionaria, in control of Spanish affairs Hitler would have had all the excuse he needed to invade after the occupation of France in 1940. With Spain gone Gibraltar would have gone. With Gibraltar gone the Mediterranean would have been an Axis lake. In that event the war would have taken a very different course.

Spanish ‘democracy’ under the murderous Popular Front was an illusion. Even without the intervention of the Nationalists the country was torn between gangs of anarchist thugs - people who specialised in the mass murder of priests and nuns - on the one hand, and the communists on the other, all presided over by a weak liberal centre. The government continued to depend on Stalin for political and military support. Even Julian Besterio, a moderate socialist politician, admitted at the time that if the Civil War had been won by the Republic the communists would have taken full control, which would have been a disaster “for every other element of our democracy.”

So, yes, Franco saved Spain. In his long rule after the conclusion of the war in 1939 he also brought peace and stability, the basis for the Spanish Miracle, the sustained period of economic prosperity from the late 1950s to the early 1970s. At the time of Franco’s death in November 1975 the rate of Spanish economic growth was second only to that of Japan.

I admire Franco as much as I admire Chile’s Augusto Pinochet; I admire him for all the reasons I have given. The fact that his memory was condemned by the European Parliament, the fact that the Polish MEP who spoke in his favour was shouted down as a “Nazi” – by a German socialist, ironically - simply adds to the mix. If the European Parliament condemned the Devil I would look for arguments in his favour.

Franco’s time is past but his country has every reason to be grateful for him and what he achieved. It’s thanks to him that Spain was not wrecked by the communists in the same way that they wrecked Russia and the lands of Eastern Europe.
Posted by Anastasia F-B at 15:39