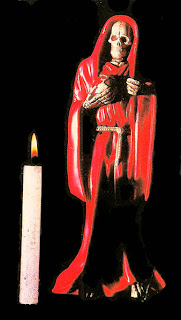 We have a serious problem with mass immigration in England. The United States, I know, has similar difficulties, with migration across the Rio Grande now at alarming levels.

Naturally enough, this kind of thing produces a backlash, especially in times of economic difficulties, a time when there are too many people chasing too few jobs. This is certainly the case in England. There is also, I have to say, an additional fear: namely, that we are allowing in too many people with traditions inimical to our way of life. Right across Europe there are concerns over the growth of Islamic fundamentalism.

That’s not something that affects the States, at least not to the same degree. But there is another alien tradition, I recently discovered, serving to deepen anxieties about immigration, going beyond concerns over mere numbers. It’s not just people who are coming in: Death is there also, riding on their backs – “And I looked, and behold a pale horse: and his name that sat on him was Death, and Hell followed with him.”

It’s not some nebulous concept I have in mind, not some apocalyptic revelation; no it’s Santa Muerte – Saint Death -, the patron saint of Mexico’s drugs cartels. Illegal immigration may very well fuel xenophobia but, let’s be frank, death cults have a tendency to fuel it even more.

Santa Muerte is fairly typical of the religious syncretism found right across Latin America, combining Catholic with pagan traditions. The trouble is that this gruesome spectre, with its toothy grin and scythe, has the loyalty of a particularly vicious tribe of devotees, the pushers of a new kind of murderous Juggernaut.

The fear is real enough: that Mexico’s vicious drugs war is pouring over the border, not in part but in whole, a war that in a mere five year period has been responsible for some 35,000 fatalities. This is bad enough but the death cult gives the whole thing an even more alarming gloss. Santa Muerte is following the main narcotic routes throughout the US, from Arizona to New York. She was there in a tunnel discovered a few weeks ago, a tunnel some six hundred feet long running right under the border, looked over by a shrine to the saint.

People have every reason to feel worried by this phenomenon, a sign of a deeper malaise. By their very nature gangs are territorial and fissiparous, drug gangs more than most, but the Santa Muerte cult provides them with a perverse cultic and iconic focus, a possible basis for cooperation and unity. Writing of this in the Daily Telegraph Tim Stanley said;

The goal of these groups is to undermine democracy and govern autonomous secret societies through family, blood and religion. It’s a global trend. The Lord’s Resistance Army that slaughtered and raped its way across Uganda from 1987 to 2007 was led by a man who claimed to channel the Holy Spirit. Perhaps the culprit behind this apocalyptic criminality was the death of Communism, which deprived thugs and thieves of a secular ideology to justify their actions. Organisations like FARC and the Real IRA converted overnight to pushing drugs. But in Mexico, family and religion filled the vacuum left by the failure of socialism.

The assumption in Europe, particularly in the pages of the hyper-liberal Guardian, is that American fears over Hispanic immigration has been brought on by racism, nothing more, and that the country is on the threshold of a new Jim Crow era, a time when racial apartheid was law. But the truth, for once, really is pure and simple: mass immigration, coupled with the importation of malign foreign cults, represents a serious threat to American civic and political culture.

As the country faces a threat from without it also faces a new threat from within, brought on by a loss of confidence and direction, shown in the wave of populist, anti-business hysteria sweeping across the land, a canker spreading outwards from New York, given encouragement even so far as the Obama House. It’s worth reflecting on this, as we here in England also face a threat from an informal alliance between jihadists and anarchists. Santa Muerte, it would seem, has a long reach
Posted by Anastasia F-B at 16:21