A Riddle Wrapped in an Enigma 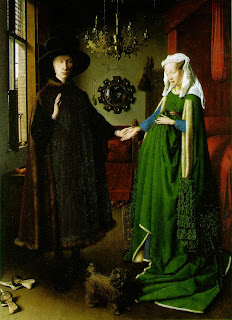 It’s one of the most remarkable paintings in the whole of western art – it’s Jan Van Eyck’s Arnolfini Portrait, sometimes known as The Arnolfini Wedding, painted in 1434. It’s one of my favourite paintings, one of the great draws in London’s National Gallery.

It’s remarkable in two senses: for the freshness of Van Eyck’s vision, the intensity of the detail, for the range of objects that might mean something, might have some symbolic significance, or might mean nothing at all, other than that they are objects in a well-appointed room. It’s remarkable also for its remarkable history, passing through the hands of the Habsburgs and the Bourbons into those of Joseph Bonaparte, whose bottom was placed on the throne of Spain by big brother Napoleon. Joseph, I was delighted to discover, was called Pepe Bottles – Joe Bottles - by his less than enamoured subjects, so known for his prestigious intake. Looted by a British officer from the dipso royal’s baggage after the Battle of Vitoria in 1813, the Arnolfini Portrait eventually made its way into the National Gallery.

More than any of this it is remarkable for its subject, a prosperous Flemish merchant couple, the first depiction of ordinary people, people who were not aristocratic or royal, just the middle class from the Middle Ages. It celebrates property, of course, it celebrates domestic comfort and wealth, as other paintings celebrate the landed wealth of the nobility.

But still there is a wonderful immediacy and homeliness to the painting; we know these people in their sheer ordinariness; we can identify with them as real human beings, not some grand statement about power. There is also an abiding mystery about this intense little oeuvre, a sense of otherness which raises all sorts of questions. It’s an enigma that's been taken up by the art historian Corola Hicks in Girl in a Green Gown: the History and Mystery of the Arnolfini Portrait, sadly unfinished at the time of her death last year.

Beyond the fact that it’s a depiction of a merchant and his...his what, exactly? Is she his wife or his girlfriend? Is this a marriage or a betrothal? There is no certainty at all on the point, despite the misleading title. There is certainly a bond between the two, a couple who are, perhaps, already married, or who have simply announced a union to come. Is the lady in green pregnant, as so many have assumed from her bloated appearance? Would a pregnant paramour have been shown at such times in such a way? Why has the painter depicted himself in the mirror in the far wall? And why, as Hicks herself asks, does the man look like Vladimir Putin?

No, he's not Russian. He is, rather, a member of the powerful Arnolfini clan of Italian merchants, well-established in Bruges by the fifteenth century. Exactly who he is, though, and, even more intriguingly, who she is, the lady in green, has proved slightly more problematic, despite decades of speculation and art criticism. It may be one of two Giovanni Arnolfinis, though neither was married in 1434. So far as he is concerned it's certainly a fully-realised portrait of a particular individual (he was to appear again in the work of van Eyck), though she seems to be more of an ideal, a type reminiscent of the painter's Madonnas. Is she there at all, was she there for the sitting, or is she yet to come, not yet emerged from the shadows of the Platonic ideal, a future promise? Oh, and the celebration of fecundity may be no more than a celebration of cloth, another sign of the merchant’s wealth!

Hicks turns her thoughts to several themes, to the symbolism and the significance not just of the central act of union, but the surrounding paraphernalia - the dog - faithfulness? -, the mirror, the rug, the clothes, the glass in the windows, the furnishings, the single lighted candle and even the oranges by the window. Oranges, still a luxurious and expensive import, are another sign that Signor Arnolfini was a man of substance, a display of conspicuous consumption. They are also a reminder of Eve's gift to Adam, a fruit, interchangeable with apples, as the produce from the Tree of Knowledge. Even the bed is a sign of wealth, a sign that this was a man who could afford to put one in his front room! What we are looking at here is a celebrity couple, a kind of illustration from a fifteenth century version of Hello magazine, people who have made it and want others to know that they have made it, a bourgeois ideal!

The title of Hick's book is a clear nod in the direction of Girl with a Pearl Earring, the Mona Lisa of the North, Johannes Vermeer's later masterpiece, another mystery about an unnamed woman, another intrigue, a wonderful vacuum filled by speculation and fiction. Likewise, we will never know any more than we do about the Girl in a Green Gown; we will never come a step closer to her and her individual destiny.

Hicks is good, but she is much better on the history than the mystery, which, paradoxically, I find quite pleasing. Some enigmas are best left as they are, to intrigue and perplex for all time. But the greater mystery is the artist himself, employed at the time of the Arnolfini Portrait as a painter in the court of Philip the Good, duke of Burgundy. Why, and by what manner, did he come to see the world in such a radical and realist fashion, in a fashion completely different from the conventions of late medieval art? We simply do not know.

Meanwhile one central question remains: why does Arnolfini look like Vladimir Putin?
Posted by Anastasia F-B at 16:14