The Perils of Finn 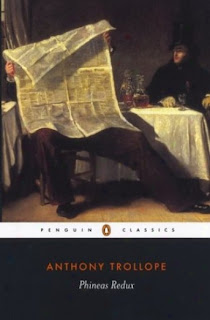 Here I am at the top of another mountain, having climbed Phineas Redux, the forth in Anthony Trollope’s Palliser series. It’s really the sequel to Phineas Finn, the second in the set, though it follows on from The Eustace Diamonds, its immediate predecessor.

It was suggested that I read the Phineas novels back to back. But, closely related as they are, I preferred to follow the author’s own footsteps. I’m glad that I did because there is a reasonably important overlap with The Eustace Diamonds, one arising from the disreputable love life of Lizzie Eustace, which has a fairly significant impact on the fate of Finn!

The further I travel the more I warm to Trollope. I’ve come quite a way now from Can You Forgive Her?, the first in the set, where the author came across to me as something of an obsessive eccentric, particularly concerning the question of electoral reform. The ballot, oh the ballot, how tired I was of the ballot! With each step he seems to me to have become progressively more relaxed, less intrusive, more inclined to allow his characters to work out their own destiny in their own way, characters that have become ever more fully rounded.

And what characters they are. What a wonderful schemer Glencora Palliser is, generous to her friends but cat-like in the defence of her own interests, in the interests of her family and the inheritance rights of her son. Yes, Phineas Redux is a political novel, far more so than its predecessor, but it’s increasingly obvious to me that the politics of power and the politics of property, essentially the main theme of The Eustace Diamonds, are intimately related in Trollope’s mind, as they were intimately related in the mind of the Victorian upper classes. Wealth, political power, love, marriage, property and ambition are all dimensions of a complicated game of social advancement.

So, act two: enter Phineas, stage left. That is to say he has returned from Ireland, where his inconvenient wife has conveniently died. Sorry, that sounds a little more cynical than I had intended. ‘Our hero’, as the author refers somewhat irritatingly to his character, though not as much as the first time around, is suitably sobered, and matured, by the experience. The young man in a hurry is no longer in quite such a hurry.

Altogether he is more sober, more reflective, than he was in Phineas Finn, though to begin with no less ambitious. In the course of the novel he is destined to become more reflective still, being caught up in a personal crisis that bring a significant shift in his perceptions of political advancement.

I’m being cryptic but I think the point of a review is to whet the appetite of a potential reader rather than précis the plot! Let me just say that ‘our hero’ finds a way back into political life at a time when politics was money. Finn has no money but he has charm, he has good looks, he has intelligence and, most important of all, he has connections, particularly with the most politically influential people in the novel – the women! Most important of all there is Lady Glencora, now the Duchess of Omnium, and her circle, which includes the talented and enigmatic Madame Max Goesler.

In climbing the greasy pole one can scarcely avoid attracting enemies along the way, those who wish to climb faster. Finn’s enemy, and his potential nemesis, is Mister Bonteen, notwithstanding the fact that they both belong to the Liberal Party. Actually I think that it’s a general truism in politics: one’s opponents are on the other side; one’s enemies are on the same side. Rivalry, after all, rather than principle, makes for a deadlier hatred. Finn’s rivalry with Bonteen has the effect of frustrating his desire for office, undermined by a whispering campaign over his ‘soundness’. It was to be potentially even more deadly when Bonteen is found murdered and Finn finds himself in the dock of the Old Bailey on trial for his life.

It is not just ‘our hero’ who is brought back in Phineas Redux; all of the characters familiar from Phineas Finn are there. Apart from Glencora and Madame Max there is the Lord Chiltern, now married to Violet Effingham, once the subject of Finn’s own amorous interest; Lady Laura Kennedy, living apart from Robert, her morbidly religious husband, an archetype dour Scot, who descends steadily into madness and death as the novel proceeds; and Quintus Slide, the slimy editor of The People’s Banner, who attempts to destroy Finn with a series of insinuations about his relationship with Lady Laura.

The bond between Laura and Phineas, strong and stronger, on the one side, weak and weakening on the other, is one of the central tensions of the novel. He once loved her; he once proposed to her, a proposal that was rejected, though she loved him, in favour of wealth, wealth that was to be accompanied by misery. But just as Finn has outgrown her she has not outgrown him, descending into morbid forms of attraction, a contrast in every way with the practical Madame Max, who performs an invaluable service for him in his hour of greatest need.

I enjoyed this novel tremendously; I enjoyed the political and personal nuances and the interplay between them both. Trollope is a master of words, of character, of simple descriptive power, which shows in all sorts of ways, even so far as his treatment of the hunting themes, in which he excels. Come to think of it that’s another way of reading this book, as kind of fox hunt, with Phineas Finn at one point as the bigger quarry. He makes it safely to the covert - I don’t think I’m giving too much away in saying that - safe in the arms, and the wealth, of Madame Max.

But I’m going to take time out. I have a trip to Egypt coming up, so all of my extra mural reading is shifting in that direction. From a serial by Anthony Trollope I’m now beginning a serial by Naguib Mahfouz, taking me from nineteenth century England to twentieth century Egypt in one swift step. The road goes ever on. :-)
Posted by Anastasia F-B at 16:29