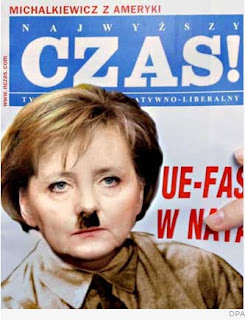 I wrote at the end of my most recent post on the European Union that I was utterly tired of my country being held hostage to German history. I had already hinted, in discussion with Chris Coffman, that this was something that I intended to write about more fully.

Botheration – my lightning has been stolen! Well, a bolt or two has been taken from the armoury by one Sir James Pickthorn, whose letter on the present mad muddle over the euro was published by the Daily Telegraph on Friday. I think I shall allow the parfit, gentil knyght to speak for himself;

The words of Angela Merkel, the German Chancellor, summoning the spectre of war if the euro is not saved show how out of date the European project is. The idea that France and Germany will restart the [Franco]-Prussian War, the Great War or Second World War is ridiculous. The message of these wars was and is that countries like being sovereign, and that democracy and free trade are valid ideals.

It isn’t an entirely new suggestion, of course, that we either have European integration or we have a German invasion of Poland. I’ve come across it several times before. I heard that tired old frump Shirley Williams, the moth-eaten Grand Dame of the Liberal Democrats, trot out the Europe or war formula. I came across it also in reading Edward Heath, Philip Ziegler’s biography of the wretchedly incapable prime minister who took Britain into Europe in the first place.

Williams and Heath belonged to a generation of post-war cowards, people who betrayed this country because they were afraid of Germany, afraid of the German past, afraid that a German past might very well be a European future without the discipline of a trans-national super state. They were, if you like, the deeper appeasers. Always they lacked the intelligence to see that old quarrels had been superseded by new global realities, or that Germany, having taken a bad road twice, the second time at such cost, was never going to take it again.

So Britain was seduced into the European ‘ideal’ by fear of Germany, by an act of abject moral and political cowardice that did not stop from hiding the full implications for national sovereignty in our accession to the Treaty of Rome. We have to go in, you see; otherwise the German wolf might get us. It was a fairy-tale for children. Yes, that’s exactly how I see Europe – a fairy tale for children. And always keep a-hold of Brussels nurse for fear of finding Berlin worse.

Where the evidence for this bogus historical nightmare comes from I’ve not the faintest idea but I am absolutely sick and tired of the damage it has done to my country, to our sovereignty and to our ancient political liberties. I become increasingly convinced that this nation was betrayed by Heath & Co, people who looked for guidance in the tea leaves at the bottom of the cup of history, only to find their own stupid reflections in the dregs.

I used to believe, a la David Cameron, that it would be possible to renegotiate the devil’s bargain concluded by Heath: that some restoration of sovereignty was possible in the repatriation of powers.

Things have gone too far for that; Europe is a bally, bloody mess which I personally want no part of, a mess politically and a mess economically. Let them get on with their own crazy projects, turning Greece into an outpost of the Fourth Reich, the Reich of complete mediocrity, hocking the Continent to China.

I sincerely hope in the course of my lifetime to see this nation take the bold move and get out altogether, which I feel would be the people’s choice if the people were allowed a choice. If that means that Germany will turn rapacious eyes east the Oder, too bad; that’s something that I shall just have to live with, that and the prospect of Adolf Merkel.
Posted by Anastasia F-B at 18:06