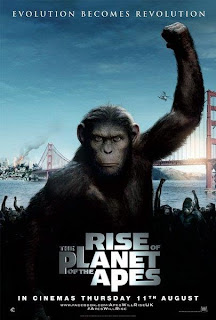 I was ‘persuaded' (much pouting and nagging!)to go and see The Rise of the Planet of the Apes, Rupert Wyatt’s sci-fi blockbuster presently wowing the masses. The thing is I’m not all that keen on this kind of hairy genre, all the less keen having, some time ago, seen Tim Burton’s Planet of the Apes, a risible remake of an 1968 original. I really did not expect much better than a silly script and actors prancing around in pantomime simian costumes.

How wrong I was; how good this movie is, making some serious points in a gripping and marvellously entertaining fashion. The special effects are a wonder to behold: I’m told that none of the apes were actually apes! The original movie, directed by Franklin J Schaffner and starring Charlton Heston, also had a serious point to make, though in that BCSE age– Before Convincing Special Effects – people striking pompous attitudes while dressed in gorilla and chimpanzee costumes makes it almost impossible to watch without laughing.

The Rise of the Planet of the Apes is a prequel, a foretaste of things to come, as the human world mutates into a simian one. It reflects the anxieties of this age, just as the 1968 movie did of that age. Then the preoccupation was with the big questions of racial discrimination and hatred, all against a background of nuclear Armageddon. Now the chief focus is on the dangers of biotechnology and genetic manipulation; the dire consequences, in other words, that could arise from humanity’s God-substituting arrogance.

The movie is not set in a possible future but a likely present, where animal experimentation has an accepted part to play, not only in the pursuit of science but also in the pursuit of profit. Will Rodman (James Franco) is a scientist working for a pharmaceutical company in Calafornia, researching into a cure for Alzheimer’s, a noble task made all the more noble and immediate in that Charlie, his own father (John Lithgow), is suffering from the disease, eating away at his personality and his intellect.

Less noble is the experimentation on chimpanzees captured in the wild, one of whom, Bright Eyes, gets smart and smarter, and then – apparently –goes mad, after being used as a test subject for a new wonder drug. The director of the project (David Oyelowo), much less interested in humanity than profit, orders the destruction of all the chimps when the experiment goes wrong. There is one survivor, Bright Eye’s baby, whom Rodman smuggles out of the institute to raise as his own. This chimp he calls Caesar, a hint of things to come, of Rubicons to be crossed.

Caesar, the star of the show, is magnificently played by Andy Serkis, the Gollum of Lord of the Rings, cut down in ape dimensions. What I mean to say is that this is not his first outing in simian shape; that was in the 2005 version of King Kong. So, from super-sized gorilla to super-brained chimp went the devolution! Some of the best scenes in the movie involve the emotional bonding between Caesar and Charlie Rodman, both of whom continue to be subject to Will’s now illicit wonder drug experiments.

As Caesar matured from boisterous infant to surly and inquiring teenager I was reminded of some lines from Kipling’s poem The White Man’s Burden. Yes, this was Caesar, half devil and half child, the greater devil when he sees Charlie being attacked in the street, launching his own reprisal, which leads to his incarceration in a kind of ape San Quentin run by Tom Landon (Brian Cox) and his son Dodge (Tom Felton), who turn out to be an unlikable and cruel pair of ape-like humans.

The end result is a prison break come ape rising (Caesar as Spartacus!), with humanity, now suffering from a bloody nose (hold that in mind for a sequel; clearly an I am Legend super pandemic is on the way) getting a bloody nose from assorted chimps, gorillas and orang-utans in a battle on the Golden Gate Bridge. At this point you should be well immersed in species treason, urging on the apes, led by a now talking Caesar. Taking a final farewell with Rodman, his erstwhile foster father, he and his ape army disappear into the forests of California. Human hubris, callousness and cruelty have carried lethal repercussions.

Yes, sure, take this message, if you will, or simply see The Rise of the Planet of the Apes as an enjoyable piece of roller-coasting escapism, a high class low class movie, with ups and downs to thrill one by turns. Caesar came, Caesar saw; I was conquered.