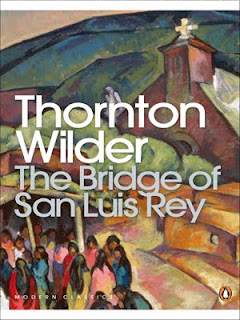 I first read The Bridge of San Luis Rey, Thornton Wilder’s 1928 Pulitzer Prize-winning classic, when I was sixteen or thereabouts. What relevance is that; why does it matter what age I was? Let me defer the answer to that question until I get a little deeper. I’ve now reread it, in situ, so to speak, in Peru, where the action of this brilliant little novella is set. I reread it, occasionally pausing for reflection, looking out over the distant Andes.

It begins with a tragedy: at noon on Friday 20 July 1714 the old Inca bridge between Lima and Cuzco broke “and precipitated five travellers into the gulf below.” News of the disaster spread across Peru, emphasising the mutability of all things. For the Bridge of San Luis Rey, named after Louis IX, the king-saint of France, was believed to be among those things that would last forever, that its collapse was unthinkable.

One man witnessed the unthinkable – Brother Juniper, a Franciscan missionary from Italy. There are bigger question to be answered here, questions about God’s purpose, questions about destiny. Poised between the age of faith and the age of reason, the earnest friar asks one central question: why did this happen to those five people? He believes that theology can be set on the same basis as the exact sciences, that it is possible to read the mind of God;

Ironically Juniper’s researches were eventually to lead to his own death as a heretic, hardly surprising when one considers that there is a strong tinge of Calvinist predestination in his intellectualism.

That’s the thing about The Bridge of Saint Luis Rey: not only is it a poignant story beautifully told with great economy of prose, with words of poetic intensity, but it’s also, on another level, a light polemic, a repost to the strict beliefs of the author’s own father;

…the central idea of the work, the justification for a number of human lives that comes up as a result of the sudden collapse of a bridge, stems from friendly arguments with my father, a strict Calvinist. Strict Puritans imagine God all too easily as a petty schoolmaster who minutely weights guilt against merit, and they overlook God's 'Caritas' which is more all-encompassing and powerful. God's love has to transcend his just retribution. But in my novel I have left this question unanswered. As I said earlier, we can only pose the question correctly and clearly, and have faith one will ask the question in the right way

The friar, looking for cosmic answers, only finds individual lives, people who are imperfectly perfect; people like Dona Maria, the Marquesa de Montemayor, and her servant, Pepita; Esteban, the earlier death of whose twin almost drives him to suicide; Uncle Pio and Jaime, the young son of Camila Perichole, Peru’s most famous actress.

Beyond the dead, whose lives are explored in compelling vignettes, three in the major key, the story touches on the life of Perichole herself and her relationship with all of the central characters, especially Uncle Pio, the man who discovered her in the first place and does all he can to nurture her talents; who loves her, teaches her, spurs her and serves her all at the same time. There is Madre Maria del Pilar, the Abbess of the Convent of Santa Maria Rosas de la Rosas, where Pepita, Esteban and his brother Manuel grew up. And there is Dona Clara, the estranged daughter of the Marquesa de Montemayor, for whom she is only able to express her love at a distance, in letters that are destined to become classics of Spanish literature. You see there are other bridges here, bridges that remain unbroken, bridges in the heart.

I’ve seen reviews where the claim is made, somewhat repetitively, that the central theme of the novella is the problem of why good things happen to bad people. But that seems to me to be missing the whole point. People who think like that haven’t really got beyond the bafflement of Father Juniper.

There can be no conclusions here; there are no conclusions beyond the truism that the mind of God is inscrutable, that nothing can be read into individual destinies. The central theme is not about the vagaries of fate or predestination, but love and the search for meaning in love. That’s the pattern; that’s the key, summed up in the final words of, words heart-gripping depth and beauty, thoughts given to Madre Maria;

But soon we shall die and all memory of those five will have left the earth, and we ourselves shall be loved for a while and then forgotten. But the love will have been enough; all those impulses of love return to the love that made them. Even memory is not necessary for love. There is a land of the living and a land of the dead, and the bridge is love, the only survival, the only meaning.

Yes, I read this when I was sixteen. Here I am, almost ten years later, a little more polished, perhaps, a little sharper in my understanding of some of the core philosophical and theological issues, but really not a step beyond that final simple truth which moved me to tears.

In an Amazon review – generally a good one – the writer, responding to the incomprehension of an earlier contributor, said that understanding requires maturity, that overall this is a book better read when one is 60 rather than 16. Prior to this he wrote that the author’s conclusion was ‘unsatisfactory’.

If Wilder had written a book three times as long, if he had taken the path of Friar Juniper, if he had elaborated on questions of causality and chance, of will and destiny, he would have moved further from the truth, not closer. I’m glad I read The Bridge of San Luis Rey when I was sixteen and not sixty.
Posted by Anastasia F-B at 15:27