On the Trail of the Sun 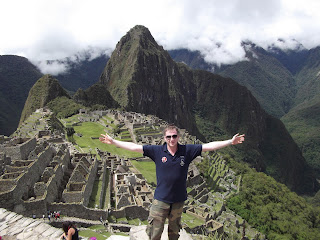 Up along the hostile mountains,
where the hair-poised snowslide shivers --
Down and through the big fat marshes
that the virgin ore-bed stains,
Till I heard the mild-wide mutterings
of unimagined rivers,
And beyond the nameless timber
saw illimitable plains!

Well, here I am. I’ve been there and now I’m back again. We flew in from Lima earlier this afternoon. I’m so tired, not having slept at all to ward off the effects of the dreaded jet lag. But before going to bed I simply have to record my impressions – and publish some of my pictures - while it’s all fresh in my mind; while the after-image of the Sacred Trail, the crossing of Dead Woman’s Pass, my first sight of Machu Picchu, the citadel of the gods, a greater Olympus, is still at its most vivid.

At the risk of sounding silly I really have to say that I’m finding it most awfully difficult to find the right words. Perhaps I should have left this until the morning, or to a time when I’m less tired and emotional, but I can’t. All I can say is that some of the things that I’m getting ready to write about really can’t be described; they have to be experienced. If you can go go, make it one of the objectives of your life, one of the things you simply have to do before eternity closes the gates forever. See, I told you – tired and emotional!

I’m rushing too far ahead. After arriving in Peru, just over two weeks ago, though it seems much longer, we spent several days exploring Lima, the capital founded by Francisco Pizarro, the bastard who overthrew the Inca Empire. No, I’m not being judgemental; he really was a bastard in the proper sense of the word! There is some really super Spanish colonial architecture in the old centre of the city, including the Cathedral of Saint John. We stayed in the Miraflores district, which reminded me slightly of the Zona Rosa in Mexico City, with the same concentration of bars, clubs and restaurants. Ah, that night, those stars and all those pisco sours! 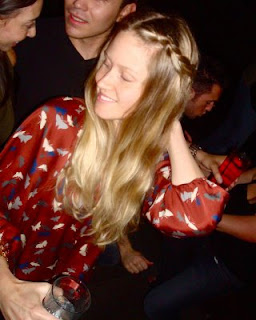 On the subject of restaurants I’ve absolutely fallen in love with Peruvian cuisine. We had a variety of meat and fish dishes but my favourite by far was the ceviche of sea bass and prawns. I was told by some of the locals that we made friends with that not only is ceviche the national dish of Peru but the government even declared an official holiday in its honour! Ours came with a variety of accompaniments, including a hot sauce, (potentially lethal in large helpings!), corn on the cob, sweet potatoes and fried corn crenels. And then there is guinea pig, yes, guinea pig, all replete with the little claws and snout. I had a bit of a struggle with this, remembering the class pet in my junior school. But we had had a long day; I was hungry, it looked great and smelled wonderful. What did it taste like? Chicken, that’s what. Doesn’t every white meat taste like chicken in the end? Well, we have no other basis for comparison. 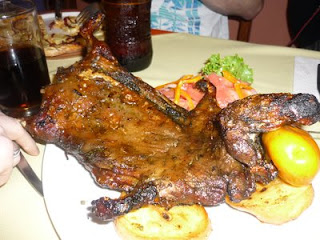 I have to discipline myself or this is going to become too horribly long. There were so many things I did, visiting wonderful museums and nature reserves; I was even able to test my skills as a hunter using a traditional blowpipe. I was on target, not too bad for a beginner. In the Lunahuana valley to the south of the capital we did a spot of canoeing and white water rafting. But the heart of the matter came with Cusco and beyond. There my serious hunt for the Incas began. 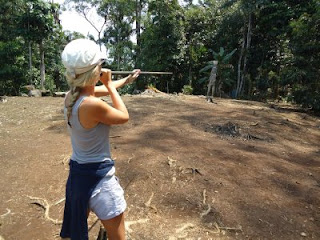 Cusco itself is a wonderful place, well worth exploring, this one-time capital of the Inca Empire. Again there is some impressive colonial architecture but it was impossible for the Spanish to wipe out all trace of the past and of the Incas, who have left their mark everywhere, structures so well-built that they even withstood the assaults of earthquakes. The Street of Twelve Sides is a marvel; that’s all I can say.

Beyond there were deeper truths to be told, footsteps to follow, places unseen and unspoiled by Pizarro and the Conquistadors. It’s now a hundred years since Hiram Bingham, an American archaeologist very much in the Indian Jones mould (actually I think most of the pathfinders were), discovered Machu Picchu, the lost city of the Incas, high in the Andes and the clouds. Actually he wasn’t the first; others had been before him. What he did do, though, was to bring this marvel to the attention of the world. 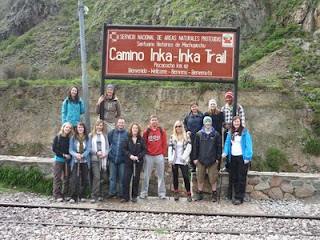 Most people now visit this unique site come by the train named after Bingham but we took the route on foot, pass and package obtained well in advance. My boyfriend and I joined a small party of fifteen, people from all across the world, accompanied by a truly knowledgeable guide and some hardy and perpetually cheerful porters, who advanced rapidly ahead, loaded as they were, to prepare camp sites and food; and my, oh, my, how welcome this was, how glad I was to see them.

The Trail is not long, only twenty-five miles or so; I’ve walked further in a single day. No, it’s not long; it’s just up and up and up! One really needs to be reasonably fit. The ascents are quite difficult at points. Frequent rest stops are needed to allow time for acclimatisation in the thin air of the mountains. 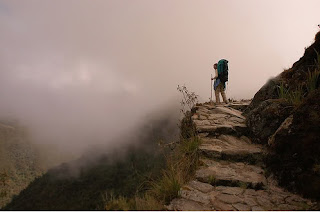 What mountains they are, what heights and what drops, what a variety of terrain. At Warmiwañusca, or Dead Woman’s Pass, so called because the terrain resembles a woman lying on her back, I felt a bit like a dead woman myself! Hardly surprising, given that this is the highest point on the path at almost fourteen thousand feet above sea level, the highest I’ve ever been without wings. Not only high but really wet, because here the rain was unrelenting. It was chilly, too, partly because of the height and partly because September is still the Peruvian winter. 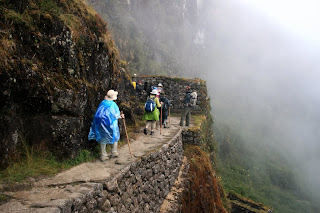 There were two more passes to come, so up we all were at dawn the following morning for a march downwards into the valley of the Pacymayu River. On and on, past increasingly splendid Inca remains and through the most breathtaking cloud forest, trees overgrown with moss and behind mountains topped with snow.

How can I not feel such huge respect for the vanished Inca civilization, for people who laid out roads and constructed staircases at such altitudes? With the stairways, storehouses and tunnels increasing as we drew ever nearer Machu Picchu I was reminded of one of the earliest Anglo-Saxon verses, written by a poet marveling at the ruins of Roman Bath, reflecting that it must have been built by some unearthly power, a race of giants. 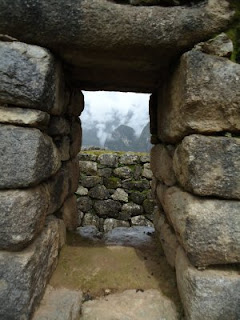 To be able to get to Machu Picchu by sun rise meant getting up at five in the morning, not easy when one has not fully recovered from the previous day’s exertions. Walking in the dark and the mist, we made for the Sun Gate of Intipunku. The dawn came, the dark went but the mist did not, at least not initially. I was prepared to be disappointed but my solemn prayer to the great Sun God was delightfully answered. 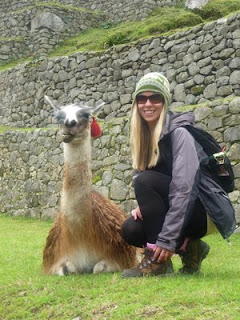 The wind scattered the clouds; the sun broke through in triumph. There it was, between two mountains, the lost and found city of the Incas. Since the days of Bingham thousands upon thousands of people have seen this marvel. But we are each, in a way, a first, a pathfinder, an explorer; I saw this with these eyes, my eyes; I absorbed it with this mind, my mind. For almost half and hour I did not want to talk, I did not want to take pictures; I just wanted to look. 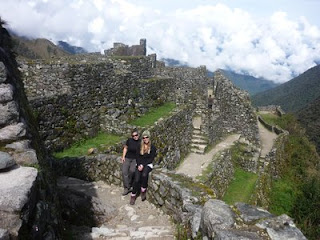 I must go to bed now and I haven’t even told you about the rest of our trip, about visiting the beautiful city of Arequipa or sailing on Lake Titicaca, so far as Bolivia. I did not make it to Colombia, though; there was simply too much to see and not enough time to see it.

I will just finish by saying that we made some new friends in Cusco, Peruvian people who told us about Inti Raymi, the Festival of the Sun, celebrated in the city each year around the summer solstice. It’s an ancient ceremony in honour of the sun god Inti, one of the most venerated in the Inca pantheon, one who bears a strong resemblance to the Roman Sol Invictus, the Unconquered Sun. Suppressed by the Spanish in 1572 as a pagan celebration opposed to the Catholic faith, the Inti Raymi was revived in 1944 and is now an annual event, days of music and dance honouring the god and marking the origins of the Inca in the bowers of the sun. With the intention of returning I post this brief anthem.