Reflections on a Great Man 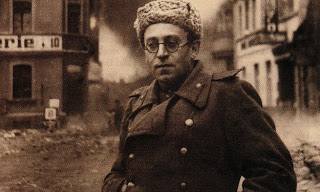 On Mamayev Kurgan, the hill overlooking the Russian city of Volgograd, the former Stalingrad, there stands an enormous statue of a female figure wielding a sword, raised into the sky. This is The Motherland Calls, commemorating the epic struggle for national survival at the Battle of Stalingrad, one of the pivotal moments of the Second World War. On the wall leading to the mausoleum underneath the statue you will find carved in huge letters the following words;

An iron wind hit them in the face, yet still they came on. A superstitious dread must have seized the foe: ‘Were these men really mortal?’

Inside a Russian soldier answers in letters tooled in gold around the base of the dome;

Yes, we were mortal indeed, and few of us survived, but we all carried out our patriotic duty before holy Mother Russia.

Neither outside nor inside the monument will you find out who wrote these words. If you ask the guide they give a general answer or simply pretend not to know. Actually, they are the from In the Direction of the Main Attack, an article by Vasily Grossman, published in Red Star on 20 November, 1942, the day after the Russian counter-offensive at Stalingrad began.

Grossman was one of the greatest of all war correspondents, particularly popular with the soldiers - officers and enlisted ranks - simply because he wrote in honest, straight-forward and gripping terms, free of bombast and the kind of inflated hyperbole usually favoured by the Soviet press. He had that rare talent only granted to the very best journalists – an understanding of the importance of detail, of the small significances overlooked by those who have been mesmerised by the ‘big picture.’

In addition he had a huge amount of personal integrity, a commitment to honesty and a commitment to the truth. It was this that lead to a steady distancing from the Soviet state, from a system based on ugly lies and blatant hypocrisy, moral corruption of the worst kind. That’s why his name is not mentioned on the Stalingrad monument, why he is still a figure that incites a degree of disapproval in Putin’s Russia, a country which, once again, sees virtue in the likes of Stalin and – for the love of God – Lavrenti Beria, the one-time head of the KGB, that jackal of the human race.

Grossman was so much more than a mere reporter. He is a great novelist in a country of great novelists. Last year I read Life and Fate, his master work set during and immediately after the Second World War. I was overwhelmed by the experience, not having previously been acquainted with any of his work, an omission I have since made good. This novel, one of sweeping vision, is now being serialised by BBC Radio in a week-long celebration of Grossman’s work.

But of the two, though it some will consider it sacrilege to say so, I think Life and Fate is the greater, simply because the author is less intrusive, or less obviously intrusive, than Tolstoy, who offers extended and rather tiresome reflections on his own personal philosophy of history, interventions that interfere with the books narrative flow.

Life and Fate seems to me to be just as sweeping but a lot more human at the level of detail. It’s also the most biting indictment of Stalin and Stalinism that I have ever read or am ever likely to read. This was a book so explosive that it was actually ‘arrested’ by the KGB, notwithstanding the fact that it was submitted for publication during the period of Khrushchev’s so-called thaw in the early 1960s. But one copy remained undetected, finally being published in the West after Grossman’s death.

Although the reaction was initially quite muted, the reputation of the novel, and of Grossman as a writer, has grown steadily over the years. Life and Fate is not simply about war or politics or struggle or treachery or disaster or adversity or triumph; it’s a book which celebrates truth and kindness, held up as the greatest standard of all, greater than the smelly littlie orthodoxies, as George Orwell put it, that contended so hard in the last century for the human soul. 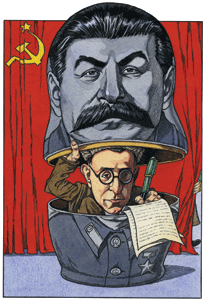