Islands of my Dreams 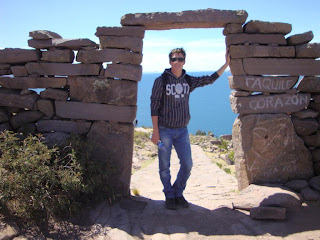 My head and heart are still full of Peru…and Bolivia. Yes, we went to Bolivia as part of our Inca quest, our search for the sun and the sister moon. I’m getting too far ahead, though, because I want to say a word or two about the lovely white city of Arequipa and the misty mountain beyond, the lair of a fire god!

After Machu Picchu I was more physically, and spiritually, exhausted than I had anticipated. I’m fit, we both are, but the altitudes, the distance and the exertions, coupled with impression building on impression, really meant that we had to spend a couple of extra days in Cuzco in recovery. Since Lake Titicaca was the next big objective we almost decided to leave out Arequipa altogether. I’m so glad we did not. The recovery was quick and the flight short.

Arequipa is a super place, the second city of Peru, right in the bosom of the Andes. And there really is a Misty Mountain – El Misti, the volcano in the distance. This is not my first volcano – I’ve bagged several – but it is the one closest to my Platonic ideal, to what I imagine is everyone’s idea of what a volcano should look like, a snow-capped perfect cone. Arequipa’s colonial-era buildings were constructed using volcanic sillar, pearly-white in appearance, giving it the nickname of White City. The churches, the mansions and the Plaza de Armas all shine with this material. 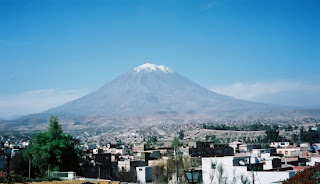 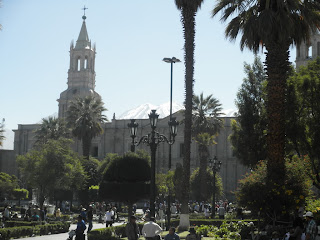 We lunched there, in the arcades of the Plaza de Armas, looking out on to the huge cathedral, which takes up the whole of one side. The Basilica Cathedral, much knocked about by earthquakes through time, the most recent ten years ago, is impressive but to my mind not nearly as impressive as the Santa Catalina Convent, so long isolated from the outside world. It’s almost like a citadel, a city within a city, one which has completely altered my image of the austerity of cloistered life! We were fortunate to be there on a Tuesday evening, one of the two in the week when the place is illuminated by torches and candles, a magical effect.

So, back to Cuzco and on to Puno by the shores of Lake Titicaca, another magical sight, with water as blue and as deep as the sky. Puno itself is not massively interesting but the lake was attraction enough. We went sailing though I decided to avoid the floating reed islands of Los Uros, too horribly spoiled by tourism. That’s the paradox, is it not; people like me come to these places in wonder only all too often destroying the wonder in the process. At least I hope I come with a sense of reverence, not doing too much damage to local customs and mores, eating what local people eat and respecting what local people respect.

Now I know you have probably heard this heaps of times but Titicaca is the highest navigable lake in the world. There we were, floating along at almost three times the height of Ben Nevis, the highest mountain in Britain. Thrilling, yes it was, but cold, oh, so cold, especially at night.

I would have liked also to have visited the funeral towers of Sillustani but time was beginning to bite at our heels; so on to the bus, on to Copacabana and on to Bolivia. This was an alteration to our original plan (by now Cartagena was totally out of the question) but Titicaca is the sacred heart of the Incan civilization and the sacred heart of the sacred heart can only properly be visited from the Bolivian side, with easy access to Isla del Sol and Isla de la Luna – the Island of the Sun and the Island of the Moon.

Isla Del Sol is not just the largest island on Lake Titicaca it was also the most revered holy site in the Incan Empire, the legendary birthplace of their civilization. It was here that Inti, the Sun God, was born. It was also where Manco Capac and Mama Ocllo, the Inca Adam and Eve, came to life. Manco Capac and his sister-wife then travelled to Cusco, building a temple dedicated to their father, Inti, and founding the Inca civilization – the Sun in splendour.

We decided to avoid the normal tour boats, which only allow one an hour or two at most on the island, instead hiring our own craft, spending overnight at Yumani on the southern side of the island. I particularly appreciated the welcome from the Inca at Yumani harbour! 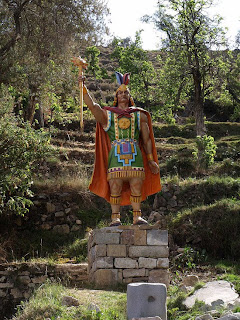 So on up the Inca Steps on our way to the ruins at Chincana on the north of the island by way of Titicaca – the Rock of the Puma – after which the Lake is named. There is just so much to see across the islands, impossible to take in, really, in the few days we spent in Bolivia. Having been to the Sun I also went to the Moon, the nearby island, which has the remains on an Incan nunnery, an absolute must see for me! 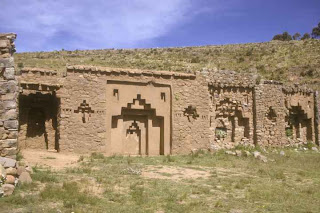 Anyway, having done most of the things I wanted to do we journeyed on to La Paz, the capital of Bolivia, for an overnight stay. Alas there was no proper time to explore this mountain city, for in the morning we flew back to Lima for the onward connection to Heathrow, England, home and beauty. Goodnight Peru, goodnight Bolivia, goodnight to the Sun and the Moon and the islands of my dreams. Good morning Egypt. :-) 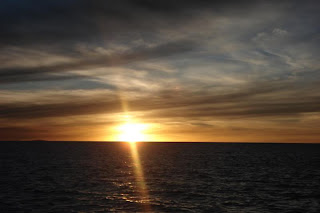