The Mirror of Mediocrity 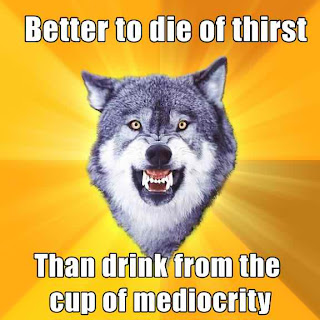 Virtually the first column I make for when the Spectator thumps through my letterbox on Fridays is that by Rod Liddle, whom I once described as the thinking woman’s chav; yes, I’m the thinking woman and he is the chav! I may not always agree with what he says but he writes in a compelling, trenchant style, invariably telling it as it is, no punches held, no holds barred, no kicks disallowed.

Last month he wrote several pieces I most assuredly agreed with, all in the aftermath of London’s August madness. I’m thinking in particular of an article headed Our children urgently need less self-esteem. In this he takes his departure from the assumption that has haunted educational and social policy for decades, namely that there is no such thing as failure, that children, regardless of potential, or lack of potential, need more self-esteem. No, they do not, he wrote, they need to have the self-esteem sucked out of them because “they have way, way too much of it.”

It begins with schooling, or what passes for schooling in the abysmal public sector. Teachers are in retreat, more and more circumscribed in what they can do and say. They dare not tread on self-esteem. Children, Liddle writes, are not corrected when they misspell, not told that they are falling short of a standard because there is no standard for them to fall short of. Emphasis on hard knowledge is giving way to soft interpretation, to a gloss all too often of simple ignorance.

Apparently a former teacher wrote to the Spectator, complaining of the climate of lies in which “children believe that they can get away with anything.” In other words, if anything goes wrong in their lives it’s someone else’s fault: their teachers, or the police, or society. They are the victims of an educational philosophy based not on learning and the discipline of learning, not on what is right and what is wrong, but ‘bringing out’ even if what is brought out is arrant rubbish, all choices being equal. Here, Rod, speak for yourself;

This is a statement of what is wrong with our schools, but it is not much of one, and it exists alongside the insistence that any form of elitism must be wrong by definition, because all outcomes are sort of perfectly OK.

This is the kind of thing that really makes me mad, this lowest common denominator approach to life, the celebration of idiocy and the damning of excellence. I believe in elites; I do not accept for a moment that we are all born equal; some are meant to be lavatory cleaners just as others are meant to be rocket scientists.

We have, if you like, a kind of Brave New World which serves neither cleaners nor scientists, for all are reduced to a lumpy medium. There are no Alphas any more and no Epsilons; just a mass of undifferentiated Gammas. It’s the world of ever increasing academic inflation, a world in where university entrance is believed to be a right rather than a privilege, the world of Big Brother, and I mean the ghastly TV show, holding up the mirror of mediocrity, a reflection of what we have become

I’m offering Rod the final word with thanks for the inspiration, thanks for telling it like it is. Right on, comrade!

So by my reckoning the last thing we want is top raise the self-esteem of the inner city kids who might one day end up smashing down their local JJB Sports shop and nicking the trainers. None of the hooded imbeciles I heard seemed terribly short of confidence or self-assurance or self-esteem; it oozed out of them like pus, along with self-righteousness. They still do not think that they have done anything wrong; they are unfamiliar with the concept that something can be ‘wrong.’
Posted by Anastasia F-B at 15:41