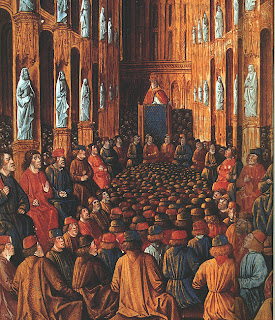 It’s the kind of copy that most historians would kill for, not just a review of a forthcoming publication, but the forthcoming publication featured as a news story! And so it was on Friday, when the Times devoted a half page in its news columns to Peter Frankopan’s The First Crusade: the Call from the East, scheduled for publication in February. There it was, under the heading Historian lifts his sword against the accepted view of the First Crusade, truly splendid stuff.

Ben Hoyle, the paper’s arts correspondent, reporting from the Cheltenham Festival, even concludes with the imprimatur of Simon Sebag Montefiore, the author who ranges between Stalin and Jerusalem, who says that the new sojourn into the Crusades is “a missing part of the puzzle.” Well, yes, but there is one tiny problem – it’s nothing of the kind. I’ll come to this in a moment but first a few words on the basic thesis.

According to the press release issued by Harvard University Press, the publishers, Frankopan, director of the Centre for Byzantine Research at the University of Oxford, is “countering nearly a millennium of scholarship by emphasising the overlooked eastern origins of the crusades”. A thousand years of scholarship – my goodness; what a claim! Sorry, that’s a digression. The argument is that the whole thing was rather less about religion, less about crusades, if I can put it like that, and much more about politics, territory and power.

Though I’m far from being an expert on the crusades, that’s something I had already picked up on from a reading of Sir Stephen Runciman’s classic three volume study A History of the Crusades, slightly dated but still meaty, supplemented by John Julius Norwich’s History of the Byzantine Empire, another triple decker. Neither of these books overlooked the ‘eastern origins’ of the Crusades, the argument that is supposedly set to destroy the Thousand Year Reich of scholarship.

The process that led to the declaration of the First Crusade in 1095 began over twenty years before, in August 1071, to be precise, when the Byzantine emperor Romanos IV Diogenes was defeated and captured by the Seljuk Turks at the Battle of Manzikert on the eastern fringes of the empire. Thereafter the Turks moved steadily westwards, overrunning most of Anatolia, now modern Turkey, and threatening Constantinople itself.

The loss of Anatolia was particularly serious because it was the main recruiting ground for an empire that desperately needed soldiers. Where were these to come from now but the Christian West? In this atmosphere of growing crisis the Emperor Alexis I Comnenos appealed to Urban II, the reigning pope. He simply wanted mercenaries. What he got was wholly unexpected and, in the end, wholly unwelcome – he got a Crusade.

Western Christians may have been dim but not so dim that they did not know that Jerusalem had been under Muslim occupation for over four hundred years. It was the new stories of Seljuk attacks on pilgrims, as much as Alexis’ appeal, that motivated Urban, present at Clermont in France for a church council. It was an ideal opportunity to assert his authority in the east as well as the west by proclaiming a great religious enterprise, one which captured the mood of the moment. God may have willed it; Urban certainly did.

Now I have no wish to be unkind, and one should be careful with publisher’s hyperbole, but if Frankopan is seeking to marginalise the religious fervour of 1095 to support his thesis then he is a fool. It’s a crucial part of the mix. How else does one explain Peter the Hermit and the fanatical crowds who followed him east? How else does one explain the large scale pogroms that followed in their wake, the Jews of Europe being a more immediate target than the Muslims of Asia?

It’s certainly true that the real Crusade, the professional Crusade, if I can put it like that, headed by professional soldiers, was a complex phenomenon. Religious enthusiasm was there, so, too, was land hunger, in what was essentially a Norman expedition, headed by landless younger sons, people who were to carve out counties, principalities and kingdoms in the Levant, from Edessa in the north to Jerusalem in the south. In the end, guided by the Normans, who had a well-established tradition of hostility to the Byzantines, the Crusaders were to be as much a danger to the integrity of the Eastern Empire as the Turks.

It’s all there – strategic desperation, religious fervour, ambition, political hostility, land hunger, all contributing to the complexity of the First Crusade. To abstract out one dimension, no matter how important, backed up by the claim that one is ‘overturning’ a thousand years of scholarship, is a step too far in hyperbole and self-promotion. This is not a missing part in the puzzle. It’s just some rather tiresome academic inflation.
Posted by Anastasia F-B at 16:15