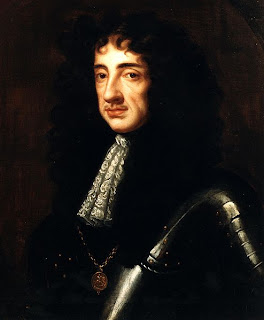 In so many ways Charles II was the most complex monarch England ever had, and the least principled. It’s hardly surprising when one considers that simplicity and principle, those virtuous vices, were qualities that Charles I, his father, had in abundance, qualities that all but destroyed the monarchy. There must have been points in the mid-1650s, with Cromwell’s Protectorate firmly in place, when Charles, wandering the Continent with his threadbare and impecunious court, despaired of endless exile.

But he came back in 1660, restored to the throne by his former enemies and not by his friends in the old royalist party. He came determined to rule but ever mindful that there were clear limits to his power, dangers in failing to play a complicated game, a game in which principle had no part.

The traumas of the Civil War, the death of his father, the absence of a stable guiding influence in his life, the beggary and humiliation of exile, bit deeply into his character. He was determined to survive and survival meant weighing and calculation. Oscar Wilde’s dictum about cynics may very well have been invented for Charles; for he truly was a man who knew the price of everything – and everyone – and the value of nothing.

For me John Wilmot earl of Rochester’s poetic comment, though slightly unfair, carries by far the greatest resonance;

We have a pretty witty king,
Whose word no man relies on;
He never said a foolish thing,
Nor ever did a wise one.

Long after his death Charles continued to perplex historians, who simply could not be sure of his motives. He was in the habit of telling people what they wanted to hear. Even his death-bed conversion to Catholicism gives the impression of being part of a game, undertaken for no better reason than to please his brother James!

To be fair it has to be said that, as an individual, he was a reasonably tolerant man in an intolerant age. Much given to latitude in himself, he was prone to indulge others. His tolerance went so far as to desire a measure of relief for Catholics and dissenters, still under the burden of the penal laws, evidenced by the 1672 Declaration of Indulgence. But by this time the goodwill towards the throne at the Restoration had given way to suspicion about the king’s motives and the perceived Catholic influences behind the throne. From this point forward the so-called Cavalier Parliament was to become as potentially dangerous as its old Roundhead predecessor.

Charles needed money; Parliament demanded concessions. There was one way around this deadlock: the king could go elsewhere. He did; he went to his cousin Louis XIV. Here we have the makings of the infamous Treaty of Dover in which Charles agreed to embrace Catholicism in return for a large French subsidy, enough to free him from the tutelage of Parliament.

There has been more confusion over this bargain than any other single act in English diplomatic history. Charles, it should be stressed, was obliged by its terms to make a personal declaration of faith, that’s all, but for centuries after the Whig view prevailed that he had agreed to hand over the whole realm to Catholicism. Parliament was deceived, the nation was deceived, even some of the king’s closest counsellors were deceived, so the view went. But the real truth about the Treaty of Dover was even simpler: the biggest dupe of all was Louis!

The whole process was deeply cynical in true Carolinian style. Yes, Charles was sympathetic to Catholics – he had good reason to be – but sympathy would never be allowed to conflict with self-interest. Far from returning the realm to Catholicism in the style of Mary Tudor he was never even to make the promised declaration of faith; it was merely a way of extracting maximum profit at minimum expense. It cost him little, it cost him his word, and for cynics that’s a coin of particularly low value. There are few tricks that Machiavelli could have taught this royal chameleon.
Posted by Anastasia F-B at 15:41