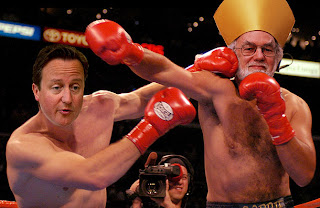 We do not run away from history. We know what the present crisis of capitalism demands of us...we are in the death-throes of late capitalism, which threatens to inflict even greater violence on mankind than it has done before, we must make our stand with the oppressed, with the movement for liberation throughout the world.

Who do you think wrote that? The content and the tone might give you a clue. Could it possibly be Karl Marx and Friedrich Engels, something from The German Ideology or The Communist Manifesto perhaps? It has all the passion of those early works, the eagerness and the anticipation, the determination to surf on history's next big wave.

Actually, it was not the old bearded prophets of communism: it was Archbishop Rowan Williams, the bearded prophet of all sorts of nonsense, from socialism to Sharia. Yes, he co-authored this manifesto in 1974 with one John Seward, a Catholic priest, sitting anticipating the future in an Oxford pub, all dewy of eye and iron of pen. As soon as this pub closes, they sang together, the revolution starts.

Though never published, it was written for the Jubilee Group, a left-wing Christian organisation, which Williams helped found during his student days at Oxford. Alas, the other members, though broadly sympathetic to the view expressed in the Commie Christian Manifesto, declined to accept it, feeling, in the words the Reverend Dr Ken Leech, that it was "a bit of a rant."

Ranting was something Williams did rather well in his distant student days. In the original group manifesto, which was adopted, he said that capitalism "could inflict even greater violence on mankind than it has before". Than it has before what? Perhaps before Jacobinism, socialism and communism came into the world to show how violence was done properly.

Throughout the 1970s and 80s, as the Sunday Telegraph reported yesterday, Williams was a leading member of the Jubilee Group’s executive committee, alongside Tony Benn, now something of a political dinosaur, one Eric Heffer, then an MP, and Reverend Alan Ecclestone, a Communist priest. I'm sure it won't surprise you to learn that the jubilant Jubilees were to be found where the cause needed them, condemning the campaign to free the Falkland Islands from Argentinean generals who were not fascist. No, it was Margaret Thatcher, then prime minister, and the Tory Party who were guilty of "racism and creeping fascism." The Poll Tax was also a big no no, as was the US base at Greenham Common.

Christianity, too, was a bit of a no no, at least as far as the fascist Thatcher and President Ronald Reagan were concerned. In 1989 Williams gave a speech at Edinburgh University, where he talked of the "alarming religiosity of Ronald Reagan and Margaret Thatcher." Yes, it must have been absolutely terrifying to hear them talk of God.

Given his subversive activities it's not at all surprising to discover that Little Red Ranting Hood was put on a watch list by the intelligence services. He came to the attention of MI5 soon after the foundation of the Jubilee Group, principally because of his involvement with Marxist, Trotskyite and socialist campaigners of the usual fifty-seven varieties of the loopy left.

The Jubilee Group itself was identified as a "problem" neo-Marxist organisation in intelligence documents drawn up an MI5 officer named Charles Elwell. Elwell, who died in 2008, had a high profile in the intelligence community. Known as the Witchfinder General, he was the man who cracked the Portland spy ring, identifying the traitor in the Royal Navy who was passing secrets to the Soviets. He specifically highlighted the activities of Williams in a 1989 paper called British Briefing, circulated in secret to a panel of leading politicians, including Lady Thatcher. Soon after she was to say that the Jubilee people were "the most subversive group within the religious community in England.” A newspaper at the time referred to them as "a bunch of neo-Marxist trendy clerics."

Perhaps in years to come I shall feel ashamed of some of the things I say and write at this point in my life, my mid-twenties, my late salad days, when I am still green, actually blue, in judgement. It's not fair, perhaps, to hold one hostage to one’s youth. But that's the thing - Williams is still hostage to his youth, to a whole set of risible ideas; he is still the trendy Marxist priest, ready to attack the government at the drop of a manifesto, who now just happens, by the grace of Blair, another trendy of the day, to occupy the most important clerical office in the land. Dr Leech, his old jubilant comrade, recently said of him "I would not want to commit Rowan to the language of 1974, but it does really show the heart of the theological focus of the man and this has not changed."

I'm still torn between treating the Red Archbishop as a bit of a joke or a serious danger. On balance I think him more comic than serious, though his presence in the Church of England may be part of a deeply laid plan to infiltrate moles, thereby undermining it from within. Given the damage being done to the institution under Williams’ guidance his shadowy handlers must be well pleased. I might even go so far as to say that they must be jubilant.
Posted by Anastasia F-B at 16:14