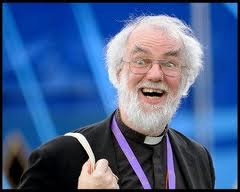 I begin by writing that I was reluctant to begin. Once again Rowan Williams, our benighted Archbishop of Canterbury, is in my sights, but as a target he is too easy, a slow, bovine and unimaginative beast. In hunting him there is no sport, no challenge at all; he is far too easy.

In the nineteenth century it was said that the Church of England was the Tory Party at prayer. I can make no general observation about the Church in the twenty-first century, other than to say that it is diminishing in painful stages, slowly poisoned by large draughts of liberal relativism, so much so that in another hundred years it is likely to be extinct. At the present it is being guided to that terminus by a prelate whose politics are more than obvious: he is the Labour Party at prayer, assuming he prays at all, other than to Tony Blair, who appointed him in the first place.

Comrade Williams at the moment is the guest editor of the New Statesman, a socialist weekly, which also happens to have Medhi Hassan as a political editor, a man who has likened non-Muslims to animals. He may have a point, because it’s clear that the red prelate is a bit of a donkey. He was braying loudly in the latest issue of this appalling journal, which itself is dying by degrees, braying against the government of David Cameron.

A climate of fear grips the nation, he wrote, anxiety about policies for which people didn’t vote, fear over changes in education and welfare policies. The free schools policy being advanced by Michael Gove, the Secretary of State for Education, is one of this “radical, long-term policies for which no one voted.”

Really; can he be sure of that? Perhaps he should pause for a moment and browse through previous editions of the New Statesman. I seem to remember a poll it published two weeks ago, in which it reported that 79% of respondents thought that free schools were a jolly good idea. The policy was actually included in the Tory manifesto, something else this muddle-brain clearly failed to check in questioning the democratic legitimacy of the government.

Welfare reform, that’s another thing that’s causing so much “plain fear”, this “quiet resurgence of the seductive language of the deserving and undeserving poor.” Why he should consider such language ‘seductive’, or just where it comes from, is a bit of a mystery. It has never been used by Iain Duncan Smith, the minister responsible for welfare reform, or anyone else in the government, either in plain or ‘seductive’ form.

The aim is simple enough: to break the dreadful cycle of welfare dependency which has condemned so many to a life on dire council estates, an endless round of fags, pot noodles and daytime TV, a more soulless life I find impossible to conceive. Once again, contrary to the red prelate’s musings, policies to lift people out of state sanctioned poverty were openly discussed prior to the general election. But he would rather see the continuation of welfare ghettos, as he sits in splendid isolation in Lambeth Palace, an unelected denizen of the Lords, with no legitimacy or mandate whatsoever, other than the Blessing of Blair.

It really is a waste of time writing about this pompous ass, this man whose intellect is clouded in a perpetual fog. We have seen him in every stage of his wretched metamorphoses. We have seen him as an advocate of Sharia Law, as a man who thinks that our ancient system of justice, of equality before the law, is a “bit of a problem.” This is a man who expressed his ‘discomfort’ over the death of one of the worst mass murders in history; a man whose grasp of history and theology is so weak that he thinks Shakespeare was probably a Catholic and that it is possible to pray for souls in hell.

I could go on but there is really not much point. He has simply added another link to his chain of absurdity, a process that I expect will continue long into the future, doing untold damage to the Anglican Church, as he embraces one fashionable left-wing or politically correct cause after another.

Since he saw fit in one of his previous outings to pass judgement on Shakespeare I think I shall conclude by allowing Shakespeare to pass judgement on him. One does not have to look too hard to find Williams in the plays. There he is, in Hamlet. Who is he? Why Polonius, of course, the royal counsellor whom the Prince taunts as a “tedious old fool.” I’m sure that Shakespeare would have been delighted by this wonderful example of life imitating art - Archbishop Polonius, pompous, garrulous, pettifogging and fatuous, a man who has no method in anything, not even his madness.
Posted by Anastasia F-B at 15:58