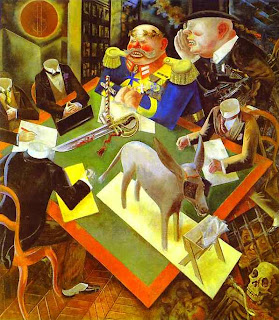 May you live in interesting times, some Chinese sage is alleged to have said at an indeterminate point in the past. It’s a kind of curse; for the time when history is at its most active is also the time that it is at its most dangerous. Actually I quite like the idea of living in interesting times, or at least in times more interesting than the present, a time of tepid mediocrity. I like the idea, for instance, of living in Weimar Germany.

I’ve been reading Before the Deluge: a Portrait of Berlin in the 1920s by Otto Friedrich. Oh bliss was it in that dawn to be alive but to be young, and visit exciting cabarets, was very heaven! I’m only half way through, so I’m not in a position to write a review at the moment. No, I just want to alight on one or two interesting snippets of information.

It’s the paperback edition I have with an introduction by the author written in 1995. However, the text itself has not been updated from the cloth version, published as long ago as 1972, when Berlin was still a divided city, when there were people still alive who could remember events in the 1920s; people who could remember the city of Gustav Kapp, Walther Rathenau and George Grosz, whose images of this time still make compelling art.

It’s the chapter headed A Kind of Madness that I find particularly compelling, that which deals with the post-war inflation. It did not tell me anything that I did not already know, that the mark was effectively worthless by the end of 1923, that savings had been destroyed, that printers were struggling to get an infinity of noughts on to paper that carried greater worth than the currency. No, it was more what people reported, more the practical implications of this human disaster. This was a time when whole apartment blocks could be bought in Berlin for a handful of US dollars.

One of the people the author spoke to was a seventy-five year old journalist who still lived in the city, though now long dead I imagine. “Yes”, she said, “the inflation was the most important event of this period. The inflation wiped out the savings of the entire middle class, but those are just words. You have to realise what they meant. There was not a single girl in the entire German middle class who could get married without her father paying a dowry. Even the maids – they never spent a penny of their wages. They saved and saved sp they could get married. When money became worthless, it destroyed the whole system of getting married, and so it destroyed the idea of remaining chaste until marriage.”

The point is here that while the upper class never lived up to their own standards, and the working class had standards of their own, the bourgeois had always obeyed the rules in outward respectability. One did not have to be a virgin when one married, though it was generally expected. Now the inflation effectively destroyed the price of chastity. In other words, virginity no longer mattered, a form of liberation for women, I suppose, at least Friedrich’s old lady thought so!

The events of 1918, the revolution that was not a revolution, is far from being the most important thing about this time. No, that was the inflation, that revaluation of all values which, as the historian Alan Bullock wrote, undermined the foundations of German society in a way that the war or the collapse of the Kaiserreich or even the Treaty of Versailles had not. The inflation was the real German Revolution, the most interesting time in the country’s history. 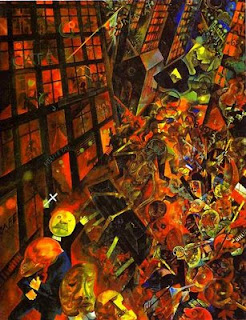