Looking at a Star 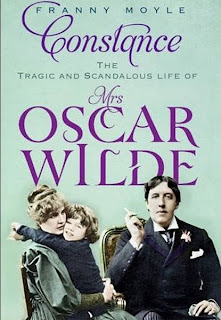 I've not long finished Constance: The Tragic and Scandalous Life of Mrs. Oscar Wilde by Franny Moyle. The following review is offered in a slightly different spirit to those I've added here before. Moyle's book, which draws on over three hundred of Constance's previously unpublished letters, is an important work of scholarship, worthy of appreciation. But my review is also a personal apology, or a debt of honour, to a woman who was so much more than simply the wife of Oscar Wilde.

I've long been a huge admirer of the work of Wilde; of his plays, funny and subversive at one and the same time; of his short stories, clever and imaginative; and of The Picture of Dorian Gray, his only novel. My admiration, I confess, allowed me to overlook so much that was thoughtless and often callous in his nature. His precipitate and wilful actions, above all his pursuit of Lord Alfred Douglas, the narcissistic, manipulative and wholly loathsome 'Bosie', did so much damage to his reputation, did so much damage to those around him. Above all, the person it damaged most, apart from himself, was Constance.

Born Constance Mary Lloyd, she and Wilde married in 1884, going on to have two children together, Cyril and Vyvyan. To me she always seemed an incidental part of the Wilde story, somehow there and not there at one and the same time. It's a fairly common view, I think. In Wilde, the 1997 biopic with Stephen Fry in the title role, Constance is played by Jennifer Ehle, a bit part for a bit life. I was also convinced by the argument of Richard Ellmann in his 1987 Oscar Wilde, still the best biographical treatment of the subject, where he says that the marriage was simply one of personal convenience for the writer, throwing the sexual moralists off his trail.

It's quite wrong. Their union, at least to begin with, was based on mutual devotion. In writing of Constance Wilde expressed himself in the most gushingly romantic terms. She was “…a grave, slight, violet-eyed Artemis, with great coils of heavy brown hair which make her flower-like head droop like a flower.”

But Constance was no dropping flower. Moyle brings her out as a fully rounded human being, as innovatory and as revolutionary in her ideas as her husband. Clever, beautiful and determined, she was also an author, writing and publishing stories for children. Indeed Moyle makes out a convincing case that it was she, and not Wilde, who wrote The Selfish Giant, one of my all-time favourite stories when I was little.

Apart from being a writer she supported a number of progressive causes, including that of female suffrage. She was one of the founding members of the Rational Dress Society, set up to challenge the Victorian conventions which effectively entombed women in cloth. True to her ideas, she took to wearing loose baggy trousers, quite a shocking innovation for the times. She was also a popular platform speaker, talking about such subjects as home rule for Ireland. Her personal motto was Qui Patitur Vincit (Who Endures Wins), a clever play on her name, which was to prove prophetic, at least as far as endurance, was concerned.

The transformation in Wilde's relationship with his wife was gradual. The outward signs are there in letters that show more affectation than affection. It's impossible to be certain if she ever suspected her husband, prior to the revelations of the trials of 1895, of rent boys and sodomy, though her brother Otho suspected quite early on that all was not quite right.

Moyle gives Constance the benefit of the doubt, though there seems to me to be a strong element of denial here, evidenced, I would suggest, by the fact that she spent more and more time staying with friends in the last years of her marriage. She herself was unwittingly guilty of introducing the serpent into Eden, admitting seventeen year old Robbie Ross as a lodger into the home she shared with Wilde in Chelsea. Ross, quaintly described by Moyle a 'practicing homosexual' (when do they perfect the practice, I wonder?), no sooner moved in than he moved in on her husband.

When the details of Wilde’s sexual preferences finally broke in 1895, brought on by an ill-advised libel action, the work of Bosie, Connie was to be the chief incidental victim of the ensuing scandal. Not only was she forced to change her name and that of the boys to avoid the repercussions that followed from Wilde's disgrace but she also suffered some appalling and petty humiliations. Wilde's creditors seized all of the contents of their Chelsea home, including his letters to his wife and the children’s toys. But Constance remained constant, even visiting her husband in prison and supporting him financially afterwards, the only thing, and the only person, that saved him from abject poverty during his Continental exile.

She got a poor return for her loyalty. Wilde, who previously intrigued with his friends to get hold of a part of his wife's private income, agreed to meet her and the children in Genoa, only to run off to Naples for a liaison with Bosie, a man he vowed to reject, the man he condemned in his essay De Profundis - From the Heart. Connie, now seriously ill, with uterine tumours, according to Moyle, died in April 1898, after an operation to alleviate her condition went wrong. Even in her final extremity Wilde did not come. It was only in 1963 that the inscription 'Wife of Oscar Wilde' was added to her headstone, more a reproach from beyond the grave than anything else.

Moyle's book magnifies Constance, a brave and noble woman, as much as it diminishes Wilde, self-absorbed and self-pitying. He is said before his death in November 1900 to have been full of remorse for his treatment of Constance and his sons. If so, he deserved to be. He took himself into the gutter. If, once there, he looked at the stars there was surely no star greater than his wife.
Posted by Anastasia F-B at 16:17