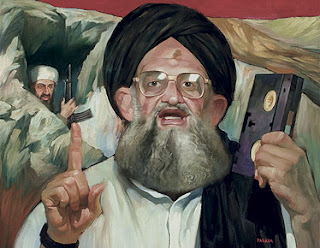 Since Osama bin Laden has been dropped into history’s dustbin, we haven’t heard an awful lot about Ayman al-Zawahiri, the new head of al-Qaida, the new Doctor Death. I’m not being wholly ironic in according him that title – he really is a doctor, a graduate of the medical school at Cairo University.

There is not really that much joy in his life; no, that's not right - there is absolutely no joy at all. It was his sixtieth birthday at the weekend though it's highly unlikely there was much in the way of celebration, because birthdays are considered to be a 'secular distraction'. This wouldn't have been any hardship at all for a man who, when he got married, demanded that there be nothing in the way of singing or dancing at the ceremony.

As a student of seventeenth century politics people like al-Zawahiri remind me in some respects of the Puritans, especially in the bleak mid-winter of English history, when they ruled the country as a kind of Islamic republic, no singing, no dancing, no theatre, no Christmas, no 'secular distractions' of any kind, just a heavy and deadening religiosity. Actually, on reflection, some of the puritans were not that bad, certainly not as bad as Sheik al-Qaeda. Oliver Cromwell, to be fair, was rather a jolly sort in contrast.

Does al-Zawahiri have any hobbies, I wonder, things he does when not planning mega-death? Oh, probably not; planning mass murder and martyrdom is such a full-time occupation. Apparently even bin-Laden liked time out now and again, watching off-duty militants play football when the two were together in the Sudan in the early 190s.

Not al-Zawahiri. He, as the Observer reported, preferred to organise a spot of murder and mayhem in his native Egypt, arranging for a series of bombings in the country. As you can imagine this was not at all popular with the recipients, especially after a schoolgirl was killed, causing a major reaction against the militants. Of the murder of this unfortunate girl he later wrote "The unintended death of this innocent child pained us all, but...we had to fight the government, which was against God's Sharia law and supported God's enemies."

You see, when you have God on your side there is no crime that cannot be excused, no murder that can't be justified, even the murder of the innocent. But we are not innocent, you and I and almost everybody else who stumbles this way; no, we are guilty; we are targets, carefully selected by Doctor Death, to be murdered at his convenience. Amongst the senior leadership of al-Qaeda he was a key player in urging the attack on America which lead to the tragedy of 9/11 and the death of some 3000 people; not innocent, not guilty, nothing; just dead.

And so it went on, his fingerprints on one outrage after another. His wretched shadow was to fall across the people of Iraq, where that psychopath Abu Musab al-Zarqwahi carried out a campaign of such vicious intensity that it turned the country en masse against al-Qaida in much the same way as the people of Egypt were alienated by al-Zawahiri's earlier campaign. We sometimes forget that it is Muslims, not infidels, who have been the principle victims of these nauseating fanatics, who kill in the name of God, a greater form of blasphemy I find Impossible to imagine.

Bin Laden has gone but the cancer is now in the shape of the Doctor Death, lurking like his master somewhere in Pakistan. The danger is ever present but there is some comfort in the news that al-Qaeda appears to be fragmenting, with serious infighting at the top. Doctor Death, not being the man his master was, not having an ounce of personal charm or charisma, is unlikely to be able to hold things together.

It's best to be cautious, though. This man, as we know from the attacks on the Twin Towers and other American targets, likes a big show, and a big show is likely to be the only thing to restore the fortunes of an organisation badly shaken by the death of its former leader. Let’s hope that a drone, or the Navy Seals, find him first. That's the one thing I wish in all sincerity for Doctor Death - death.
Posted by Anastasia F-B at 15:59