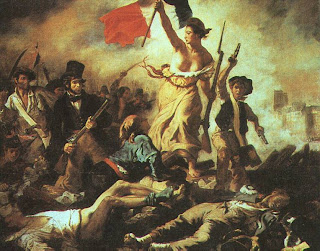 In discussion recently my attention was drawn to Thomas Jefferson’s Adam and Eve Letter, in which he extols the virtues of republicanism and liberty, specifically in relation to the events of the day in France, the unfolding Revolution. A particular passage was quoted, which proceeds as follows;

The liberty of the whole earth was depending on the issue of the contest, and was ever such a prize won with so little innocent blood? My own affections have been deeply wounded by some of the martyrs to this cause, but rather than it should have failed, I would have seen half the earth desolated.

The contest being referred to here is the constitutional struggles which saw the Jacobins emerge as the dominant political force. As I said in the original discussion, I am about to commit a cardinal sin, namely I am about to penetrate the semi-religious veneer which surrounds the American Founding Fathers, all the more outrageous because I am an Englishwoman, a Loyalist and a Royalist. So, if you find this shocking, please read no further!

To begin with I have to make it clear that Jefferson’s letter was written in January 1793, before the onset of the Reign of Terror, before the Jacobins had revealed themselves in all their horror as some of the worst political thugs in history, by far the most murderous exponents of ‘liberty’ that France or any other nation has ever experienced. Still, January 1793 was the month that Louis XVI was done to death, a sign of things to come. Putting that to one side, there are other issues, broader issues specifically concerned with Jefferson and ‘liberty’ that deserve closer examination.

Jefferson was obviously a craftsman, a craftsman in words, in grand and noble words, sentiments robbed of practical meaning. Rather than see ‘liberty’ fail he would have seen half the earth desolated. Did he have the first clue, I have to ask, over the precise meaning of this word? What a pity it s he did not stay in Europe to see half of France and then half of Europe desolated in the cause of ‘liberty.’

Take one example. When the people of the Vendée in the west of France, a peasant community wedded to their traditional Catholic faith, rose against the excesses of ‘liberty’ in early 1794 they were treated with such inhuman savagery that there have been moves to have the repression – which embraced the wholesale massacre of men, women and children – declared an act of genocide. This is hardly surprising when one reads the report that General Francois Joseph Westermann sent to the Committee of Public Safety in Paris;

There is no more Vendée... According to the orders that you gave me, I crushed the children under the feet of the horses, massacred the women who, at least for these, will not give birth to any more brigands. I do not have a prisoner to reproach me. I have exterminated all.

Clearly Jefferson can’t be blamed for this. I have not the least doubt that he would have been horrified by this ‘desolation’, by this particular definition of ‘liberty.’ So, yes, it’s possible to excuse him. What is not possible to excuse is his personal hypocrisy, hypocrisy that allowed him to laud grand abstractions like ‘liberty’ while keeping black people in servitude.

Oh, I’m fully aware of his sentiments on the evils of slavery but that only seems to compound his offence. I know all of the additional platitudes he mouthed; but it did nothing to stop him relying on servitude, freeing only two of the hundreds of human beings who were his personal property. Dr Samuel Johnson in Taxation no Tyranny, his 1775 answer to the addresses and resolutions of the American Congress, posed one central and uncomfortable question: "How is it that we hear the loudest yelps for liberty among the drivers of negroes?" There is really no answer to that.

I can only take so much hypocrisy, so many empty platitudes advancing 'liberty' where there is no liberty. But I shall withdraw, a Tory, a Royalist and a Loyalist, a hater of 'Liberty' and leave the last word to an American;