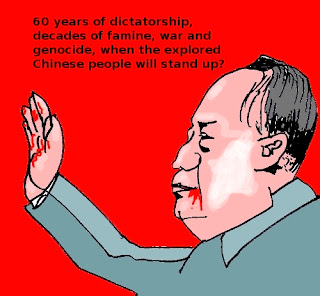 A petition carrying some ten thousand signatures was handed in to a police station in Beijing recently. It calls for the arrest of Mao. No, no, it’s not that Mao; he’s beyond arrest, just resting in hell. The Mao these people want arrested is Mao Yushi, the eighty-two year old economist who heads the Unirule Institute of Economics. He is accused of slandering the other Mao and attempting to overthrow the Communist party itself.

It does not stop with the petition. The Maoist websites are all incandescent, with comments like “The whole nation is waiting for the dawn, the dawn of the day when Mao Yu-shit (sic) and other anti-Mao reactionaries who vilify Mao are annihilated.” He’s also received abusive telephone calls from people threatening to beat him up.

So, what’s brought on this flood of hate? Simply that Mr Mao published an article in late April on a blog hosted by Caixin, a Beijing-based media group. The article is called Restore Mao Zedong as a Man. The report I read in the Economist says that it was subsequently removed from the Caixin site, as well as from several others that reposted it. But it must have been restored, because I was able to find it earlier today simply by Googling the title. Don’t wait too long. A second purge may be in the offing!

There it is, the original Chinese followed by an English translation. It’s a computer generated translation, so the sense, structure and syntax is abysmal, but it’s still possible to garner the basic meaning. Actually, the author, who is calling for the end of the deification of Mao, urging that he be judged in the light of his actions, goes that one step further. He does not just restore Mao as a man; he shows him as he really was – a beast, one of the worst criminals in human history, who brought nothing but misery to China and the Chinese people.

For those who have any knowledge of Chinese history there is really nothing new here, but for a Chinese audience, brought up in a tradition of political amnesia, it’s really quite devastating. The takeover by the Communists in 1949 did not bring happiness to China: “On the contrary it plunged the Chinese into the abyss of misery for thirty years.” Mao is responsible for the death of millions: “…for which he felt not the slightest remorse.” It is a matter of regret that the portrait of this “backstage boss who wrecked the country and ruined the people” still hangs in Tiananmen Square.

The catalogue of crimes goes on, personal as well as political. This was a man who, in the style of one of the more degenerate Roman emperors, forced people to commit suicide, one who raped numerous women. The man’s “cold-blooded nature is unsurpassed”, his “dark psychology” his lack of “basic humanity.”

There is the abuse and destruction of people. But the article also touches on the abuse and destruction of China’s ancient civilization. Chinese people are want to recall the abuse they suffered from foreigners in the nineteenth century, a period which saw the Old Summer Palace of the Emperors, the Yuan Ming Yuan, a great cultural treasure, destroyed in an act of gratuitous vandalism by British and French troops in 1860 during the Second Opium War. But that was nothing compared with the vandalism of Mao, worse than any hairy foreign devil. It all went during the so-called Cultural Revolution; ancient monuments, artefacts, antiques, sculptures, paintings, “several thousand years of accumulated culture…were all negative.”

Mr Mao is certainly to be commended on his honesty and his courage. So far he has suffered no repercussions, at least from the authorities, who presumably want no airing of the past in any public trial. The late Chairman is their legacy and their liability. Bringing too close a light on him is likely to undermine the whole ethos of Communist rule. Better if he remains in heaven, a god to whom lip service is paid, one whose scripture is ignored by all those who are not politically or clinically insane.

Still, nothing is certain. The Party is in a nervous mood as it approaches the ninetieth anniversary of its foundation. If you want to really put the wind up a Chinese apparatchik just shout ‘Jasmine!’ Yes, they are terrified that the Arab spring may sweep its way east. Apparently the word ‘jasmine’ has effectively been banned, as has the inoffensive little plant, disappearing from all the markets, something of a problem in a country that consumes so much jasmine tea!

The simple truth is that everyone in China, from the highest official to the humblest peasant, everyone beyond the Maoist fringe, is aware that the people suffered more dreadfully as a result of the appalling Chairman’s ‘mistakes’ than the Arabs ever did at the hands of their own dictators, most of whom are relatively benign in contrast. Perhaps the time really has come to let a hundred – jasmine – flowers bloom.
Posted by Anastasia F-B at 16:17