Whistle down the wind 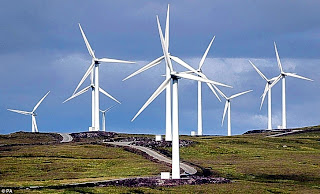 I’ve always known that the politics espoused by Green parties were fraudulent, that they advance programmes which would require not just deindustrialisation but a major winnowing of the population. They would require, in other words, some form of democide. Oh, not them and their tofu-eating set, just the ‘others’, the outsiders, the unnecessary people. It really is time that we put the whole of the wretched Green movement under closer scrutiny, time we exposed the hypocrisy and the lies.

Matt Ridley has made an excellent start in an article published by the Spectator on 21 May. Under the title of A green dark age, he outlines the damage that is being done to our countryside by the British government’s new carbon emissions target, adopted under pressure from a range of lobbies, including Greenpeace, an organisation which I hold in the deepest contempt.

I’ll come on to the environment issue in a moment but first I want to touch on another point made in the article, namely the burden a policy based on windmills and such panaceas imposes on consumers in a stealth tax, something called the renewable obligation (RO), tucked in to electricity bills.

At the moment RO adds a cool £1.1billion a year to electricity bills. Ridley suggests that by 2020 this could rise to £8billion, a further thirty per cent. The worst thing about this is that as a form of revenue gathering it’s highly regressive, a reverse Robin Hood policy, which robs the poor, even those too poor to pay income tax, for the benefit of the rich.

In what way does it benefit the rich, you ask? Ridley, who is himself rich and a landowner, gives an honest answer. It benefits them in higher wheat and timber prices; in rents for wind farms, and in something called the ‘feed-in tariff’, which pays three times the market rate to those who produce electricity by ‘renewable' means.

In thinking about this I’m reminded of the old Corn Laws, nineteenth century duties on the import of foreign corn which kept the price of food artificially high, to the benefit of an aristocratic and landed interest. Our present energy policy, the invidious RO, gives every sign of being a twenty-first century version of the Corn Laws.

The original acts helped to restrict economic growth by keeping costs artificially high. They acted as a kind of break on the industrial revolution. The industrial revolution, we all know what that meant, do we not; it meant Blake’s Dark Satanic Mills. If that’s your perception then it’s time to think again. The other point Ridley makes, all too often overlooked, is that the industrial revolution helped save the environment. As Britain turned from wood to coal as a source of energy the forests, long depleted, started to recover, as did natural waterways.

Now what, what can we expect for our green and pleasant land? More of our landscape will be despoiled, that’s what; once again our forests are in danger as the price of wood escalates. Over the country councils require developers who construct a building of more than a 1000 square metres to generate 10% of energy ‘renewably’ on site. The solution is wood, or ‘biomass’, to use the awful euphemism. So, in the case of London, we have the absurd situation of diesel lorries delivering timber, to be dried and burned on site, producing ever more carbon dioxide. The situation is so ludicrous that it would defy even the wit of Jonathan Swift. According to one estimate, as Ridley mentions, Britain is producing six million extra tons of carbon each year as a result of this redirection of the wood supply. Landowners, moreover, are harvesting their timber younger than previously in this booming green lunacy.

And all this for what, all this disruption, all this stupidity for what? We see our land destroyed, we see the economy weakened, jobs lost or exported elsewhere; we see an ever greater burden of taxation for what? Even if these green emission targets are met at considerable cost to us all it will make not a jot of difference, as our carbon footprint is that of an ant beside the elephant of China.

At some point in the future, as we go down in a sea of green, we might perhaps recall William Hague, once Foreign Secretary, whose immortal words are carved on his gravestone – “We showed the Chinese the UK’s international moral leadership on this issue.” Yes, remember that as you sit in your blacked-out and freezing home, listening to the sound of the roaring wind.
Posted by Anastasia F-B at 15:37