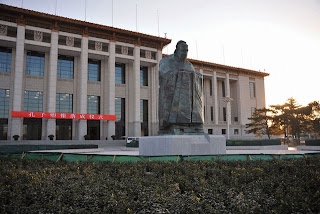 Close to the end of last month I wrote an article on the arrest and disappearance of Ai Weiwei, a leading Chinese artist and dissident (China in Night and Fog). I now have to report on the recent disappearance of Confucius, yes, Confucius, the ancient sage whose concepts of social harmony had such appeal for the Communist authorities, always afraid of inharmonious times and inharmonious people. But the wind has changed yet again and harmony, at least in the Confucian form, is no longer quite so fashionable.

Poor Confucius, there he is, forever in and out of Chinese history, approved of at one moment, despised at the next. He was certainly the political fashion as recently as January, when a 9.5 metre statue of the old boy was installed outside the National Museum on Beijing’s Tiananmen Square looking on to the Forbidden City. He was there, stared at by Mao, making the mad Chairman leap in hell.

Confucius, you see, represented everything that Mao hated, the traditional values and the feudalism of the old China. Mao came to China, particularly in the Cultural Revolution, a little like Qui Shi Huang, the first emperor, who tried to wipe out all memory of the past by destroying books and by burning scholars alive. Confucius was the past and the past was Confucius, swept into a form of oblivion.

The recovery of memory began soon after Mao’s death in 1976. Bit by bit the sage returned, tolerated to begin with and then celebrated by a nation and a government looking for roots in the past. Just as the Germans tried to spread their cultural message across the world with Goethe Institutes, the Chinese set up their own Confucius Institutes. Abroad it was a new way of selling China, a more acceptable face than that of the malign Mao, while at home Confucian notions of harmony were a corrective to the upheaval of rapid and socially unsettling economic progress.

Not any longer. At the end of April the statue was removed under cover of dark without any explanation. The thing is Confucius is a rather awkward avatar. Oh yes, there is all that stuff about obedience and duty, of deference to the system, but that’s not the sum total of his thought. In the Confucian scheme of things governments have to be accountable to the people and, what is worse from the apparatchik’s point of view, they only have the right to rule through the exercise of ethical conduct.

Ethical conduct is now the last thing that the Communist Party wishes to be reminded of, ever fearful that it might just lose the mandate of heaven, every fearful that it’s own abysmal lack of any ethical code will become increasingly apparent, ever fearful of its own people. I see from a report in the Economist that neo-Maoist websites are crowing over the sudden removal of the “witch doctor.” But the ‘witch doctor’ has proved to be remarkably resilient. The night and the fog may have descended on him but he will re-emerge, a symbol, seemingly, not just of harmony but dissidence.
Posted by Anastasia F-B at 15:21