Democracy made us nauseated 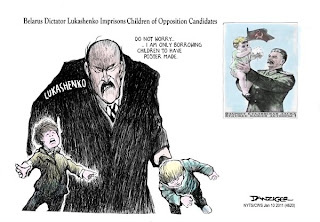 There is a museum in the town of Gori in Georgia dedicated to the life of its most famous son – Josef Stalin. So, all those nostalgic for the old Europe, the Europe of dictators and diktats, can head off in its general direction. Actually, if you are coming from the west, there is really no need to travel that far, either to the east or to the past. No, go to Belarus instead, where a tyrannical past is a living present, where Alyaksandr Lukashenko, the president, acts as something of a curator in a living Stalinist museum.

It’s all in place, a truly delightful reminder of times gone by; there are political prisoners aplenty, sudden arrests, show trails and a planned economy that, in the comforting old style, invariably overfull-fills shortages, a problem addressed by a flourishing black market.

Since last December’s fraudulent presidential election Lukashenko has been busy over-fulfilling the jails of Minsk with his former opponents, using the pretext of a bombing in the city’s subway in early April. A rather convenient excuse at that, a sort of Sergey Kirov Murder or Reichstag Fire moment, which has allowed the petty-tyrant to vilify not just his political opponents but democracy itself. “Before the elections”, he announced, “we had so much so-called democracy that it has made us nauseated.” Given the present condition of the country Belarus must be feeling so much better.

The show trails of people like Andrei Sannikov, a former diplomat who stood against the Stalin manqué in the election, are clearly intended as an entertainment, intended to distract people from the lamentable state of the economy. As the Economist reported, unable to sustain his pre-election promise to raise salaries, Lukashenka has been obliged to devalue the currency by as much as 30%, thereby wiping out the value of savings.

Oh, but it’s not his fault, he protests; no, it’s all the fault of foreigners who threaten Belarus from abroad, waging "a bitter information and political war" against the country. Who these wicked foreigners, the ghosts of Lukashenko’s febrile imagination, are is just a tad difficult to determine. Doubtless they include Jose Manuel Barroso, president of the European Commission, who refused to sit in the same room as him during the recent Chernobyl commemoration in the Ukraine. Never at a loss for the most fitting kind of words, Lukashenko responded with a witty broadside: “I don’t want to talk about types like Barroso and other morons and arseholes and the like.”

Alas for this particular Stalinist moron and arsehole his world is moving in ever decreasing circles. Under threat from international human rights lawyers, busy gathering material for a real trial, the places he can go in safety diminish by the day. In the end we may find that old dictators never die; they simply fade into irrelevance, or into Minsk, which probably amounts to the same thing.
Posted by Anastasia F-B at 16:08