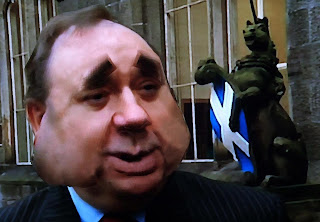 Last week’s Super Friday, a succession of elections across the United Kingdom, has produced some intriguing results, especially in Scotland, where the Scottish National Party (SNP) is now in command, having enough seats in the devolved parliament to govern without the consent of the opposition. There are runes to be read here, signs to be interpreted, though with a message quite different from that which you may suppose.

I’ve seen some alarming headlines about the end of the three hundred year old union between England and Scotland. David Cameron, the British Prime Minister, anticipating a struggle, has already said that he will defend it with every single fibre that he has. Alex Salmond, Scotland’s first minister, now has enough votes to leap into the referendum on independence that he has long desired, previously frustrated because of his minority ministry. Oh, but there is so much more here. It would be wrong to see the increase in the SNP vote as a mandate for independence.

I look between the lines. What exactly is it that I see? I see a nation that was shamefully taken for granted by the Labour Party, a nation treated like a feudal appanage, a fiefdom by a party mired in corruption, complacency and neglect. In government Labour set up a Scottish parliament with one aim in mind, and it wasn’t greater justice for the Scottish people; no, it was to see off the SNP, who had the temerity to challenge their political monopoly.

Once the Parliament was set up it was treated from the outset as the second division, a place for placemen and political mediocrities. The Big Boys, including Gordon Brown, the man who treated Scotland with the greatest condescension of all, stayed at Westminster, where the real careers were made.

Holyrood, the district of Edinburgh where the Scottish parliament is located, was for the also rans, reflected in Labour’s colourless and second-rate leadership; the leadership of Jack McConnell, the previous first minister, about as memorable as a wet day in Woolwich, and latterly the aptly named Iain Gray, who had not even sufficient residual wit to understand that the greatest challenge he faced during the recent election campaign came from the SNP and not the Scottish Conservatives, a pathetic bunch of blue socialists, Vichy Tories, as Gerald Warner, Scotland’s greatest export, calls them.

Gerald Warner, if you don’t know his work, is a journalist and columnist. Above all he is a brilliant polemicist, one who invariably aims at the Achilles’ heel. His comments on his native Scotland are bitingly exact, his comments on a culture of dependence that will ensure that the country, no matter how hard Salmond may leap and dream, is likely always to be locked into the Union. I have in front of me We’re all doomed!, an article he wrote in the Easter edition of the Spectator, full of eye-opening facts.

The narrative goes something like this. For centuries before the Union of the Crowns in 1603 the Scots mounted plundering raids into northern England by bands of reivers. It was a kind of subsidy for an impoverished nation, unable to live within its own meagre means. There are no more reivers but the subsidies still pour north, tribute from the beleaguered English taxpayers, a kind of Danegeld without the Danes.

The situation is quite intolerable. Scotland currently receives £1600 ($2000) per capita more in public expenditure than England. This invidious position is soon to be ended, as the so-called Barnett Formula, devised by a previous Labour minister, is being revised. So the SNP, riding high on a national wave, faces a budgetary shortfall of some £4.5billion, the reality of which will kick in well before the proposed referendum is put in place. Just at the present Scotland is a place bogus dreams are made on, its little life rounded with a sleep.

As I have said, Labour, which dominated Scottish politics for decades, treated the place like of fiefdom. But there is something more: it also treated it as a kind of Indian reservation, creating a culture of abject dependency with hideous levels of state expenditure, a tradition which the SNP ministry only continued, and has promised to continue still further. Amazingly, as Warner points out, by 2009 Scotland had attained global statistical significance as the third most state-dependant country in the world, after communist Cuba and war-torn Iraq. Out of four million Scottish voters just over half pay income tax. It’s even worse than that: for most of the tax payers are in public sector jobs dependent on tax.

It’s a vicious circle, a spiral from which there is no escape, certainly not in independence, unless Scotland, or Alba, to use the Gaelic name, wishes to go the same route as Albania. Perhaps there is something to be said for pyramid selling schemes after all, when there is nothing else, not even the builders of pyramids.

This is the reality of Alex Salmond’s brave New Scotland that has such people in it, people who have long lost the entrepreneurial spirit of Adam Smith, the technical ingenuity and business acumen of James Watt, have lost almost everything in the way of a free and productive bourgeoisie. Yes, dependent is the key work, not independence. New reivers will ride south, not able to live by their own devices. Can we afford them any more, can we afford Scotland? These are the questions that can no longer be avoided. For our sakes Scotland may have to have independence thrust upon it, even after the country votes no in Salmond’s referendum.
Posted by Anastasia F-B at 15:42