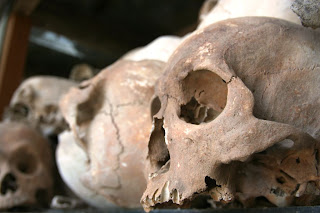 To mark the thirteenth anniversary of the death of Pol Pot, the face of genocide, the Spectator Coffee House Blog recently published an article by Michael Sheridan, which originally appeared in September 1996. In this he maintains that France had a part to play in the formation of the murderous politics of the Khmer Rouge.

The thesis is superficially attractive. A number of the senior apparatchiks of this frightful movement were educated in France, not just Pol Pot, whose real name was Saloth Sar, but Leng Sary, Khjeu Samphan, and Hu Nim. They were all there in the late 1950s, imbibing, according to Sheridan, the politics of the Left-Bank during its unyielding existential period.

They absorbed much of their theory, he continues, from the French Communist Party, a thoroughly Stalinist body, steeped in hatred of the bourgeoisie. The Party’s programme included the collectivisation of agriculture, which the Khmer Rouge carried through with a literal-minded and barbarous rigour after they captured Phnom Penn in 1975, which, so says the author, even Zhou Enlai, the Chinese premier at the time, found terrifying.

As I say, it’s superficially attractive…and utterly unconvincing. Unconvincing at least so far as a specifically French dimension is concerned. Why on earth should Zhou Enlai, of all people, have found the Khmer Rouge actions ‘terrifying’? After all this man, no more than the abject dog of Mao Zedong, belonged to a government whose actions were no less horrific in the Great Leap Forward, a more exact model for Pol Pot than any theory he absorbed in France. The French Communist Party may have talked about collectivisation – luckily for France it never got beyond talk – but it was Stalin and the Soviets who carried it into practice, with total disregard of the human consequences.

No, the rot is not in France; it is in Marxism itself, in the different mutations of Marxism, - in Lenin, Stalin and Mao, those three monsters of the twentieth century, the Red Century, the most murderous in human history. I suppose it’s possible, though, to argue that there is a more precise French root to the politics of the Khmer Rouge in the theories of Jean-Jacques Rousseau, the original monster of the idea, who advanced a thesis based on human perfectibility, an abstraction which turns the real world upside down, one that makes dispensable marionettes of us all.
Posted by Anastasia F-B at 15:57