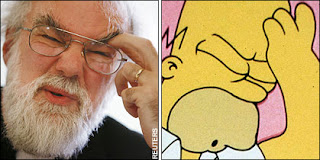 There are some people in public life who would do very well to issue apologies in advance of anything that they might say or write. Perhaps something of a blanket nature would serve, something to cover every contingency. It might proceed as follows: “I apologise for each and every statement that I will ever make, not having said the things I’m supposed to have said, or having the things I have said misinterpreted by the press, because I did not really say that, meaning to say something else.”

Confused? No more confused than Rowan Williams, our present Archbishop of Canterbury, as woolly-minded a man as you are ever likely to come across, one thing at one minute, another thing at the next. To me he is an ass, yes, an ass, no better living example of the paradox of Buridan’s Ass, the creature that died of hunger and thirst because when placed midway between a stack of hay and a pail of water it could not make up its mind between the one and the other.

Archbishop Williams cannot make up his mind about freemasons. He once described this apron-wearing fraternity as having rituals that were “satanically inspired”, that it was incompatible with Christianity and that he would refuse to appoint any member of the ‘brotherhood’ to the clergy, hardly surprising given their Robespierre-like attachment to a nebulous ‘Supreme Being,’ to say nothing of their bloodthirsty oaths! But it was all a big mistake, you see, and he did not really mean to say what he said and was profusely sorry for being found out.

That was a few years ago though the fog in the befuddled prelate’s mind is still to clear. I read in the Sunday press despite misgivings blah blah blah he recently appointed the Reverend Jonathan Baker, a senior Mason, as Bishop of Ebbsfleet. The poor old Archbishop, there are only two things wrong with him: everything he says and everything he does. No sooner was the news of this out than concerns over this latest volte-face were openly expressed, yea even so high as the General Synod.

Ebbsfleet, as we should now call him, or Brother Bishop Ebbsfleet, saw nothing at all wrong with being a Freemason and a senior cleric, nothing at all, at least until last weekend, when he decided that he was leaving the boys only club to concentrate on, to use his words, the “particular charism (sic) of episcopal ministry.” I hope he keeps those secrets, though, just to save the dear man from having his throat cut.

So Freemasons adhering to “satanically inspired” rituals can rise so far in the Episcopacy in the bright new Church of England that has such a man like Rowan Williams at the head of it. Remember this is the same man who said that ‘certain aspects’ of Sharia law seemed ‘unavoidable’ in the United Kingdom. One law for everybody, he continued, was “a bit of a danger.” Yes, over a thousand years of progress in our common law was “a bit of a danger.” Of course that was all a mistake too; he said what he said but he didn’t really say what he said, or what he said was not meant in the way that he said it. Do you know what I mean? Do you know what he means?

Humour aside I can’t be neutral here. I grew up in the Church of England; it’s part of the fabric of this nation, part of its identity, part of my identity. I no longer attend but I have a deep and abiding affection for the institution and its history. To see a man like Rowan Williams in the office of Saint Augustine, to see this inconsistent, confused, wretched hyper-liberal and moral relativist in such a position is tragic. Before this turbulently tepid priest finally departs we may find that he has done as much damage to the Episcopacy as Oliver Cromwell.
Posted by Anastasia F-B at 15:44