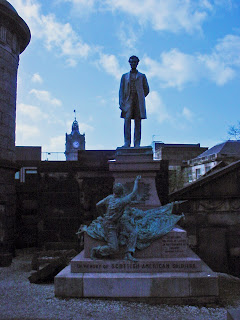 In Edinburgh there is a memorial to the Scots who fought in the Union Army during the American Civil War. You will find it in the Old Calton Burial Ground, just across from the spot where David Hume, the leading thinker of the Scottish Enlightenment, happens to be interred.

It’s quite an impressive piece of work. There, at the top of a plinth, stands Abraham Lincoln in splendid isolation. At the bottom there is another statue, that of a freed slave, holding up his hands in supplication and gratitude, now a rather unfashionable nineteenth century motif. On the east face the monument carries the following inscription – “In memory of Scottish American soldiers. To preserve the jewel of liberty in the framework of peace – Abraham Lincoln.” Yes, it’s impressive, an impressive contribution to a post-bellum mythology.

We have not long passed the two hundred and fiftieth anniversary of the outbreak of the Civil War, with the attack in April 1861 on Fort Sumter in Charleston harbour. To mark the occasion there was an article in one of my history periodicals by Doctor Thomas E Sebrell, a specialist on the subject.

It was particularly good because it corrected several misconceptions that I had, the chief among which was that the residual sympathy for the Confederacy amongst the British manufacturing and ruling class was finally eclipsed by Lincoln’s 1862 Emancipation Proclamation, which made intervention on behalf of the South all but impossible. The fact is that this was another ‘wrong move’ on the part of Lincoln, one in a series.

Let me begin by saying that Britain had long been in the front of the campaign against international slavery. The slave trade was abolished by Parliament in the early part of the century and slavery itself abolished throughout the Empire in the late 1830s. During the secession crisis following Lincoln’s election as President in November, 1860 any latent sympathy for the emerging Confederacy was effectively submerged by its adherence to the ‘peculiar institution.’ This changed when Lincoln announced that his chief objective was to preserve the Union, not to end slavery.

There were excellent domestic reasons for this: he did not want to alienate the border slave states, particularly Kentucky, of vital strategic importance to the Union cause, but in doing so he lost the moral high ground in Europe. In a letter to Lord Palmerston, the British Prime Minister, Lord John Russell, the Foreign Secretary, said that the North aimed not at liberation but at conquest. Suspicion of Lincoln was compounded after the introduction of a naval blockade against the South, which starved British manufactures of vital cotton supplies.

It was tricky time. Lincoln may have gained Kentucky but he risked the intervention of a powerful naval adversary on behalf of the South, an intervention that was likely to carry widespread popular appeal in Britain after the Trent, a British mail packet sailing from Southampton to Cuba, was intercepted by a Union vessel on the high seas and two Confederate diplomats effectively kidnapped. Queen Victoria was even moved to write in her diary of the Yankees that “They are such ruffians.” When Prince Albert saw Palmerston and Russell’s letter demanding the release of the diplomats he remarked that this means war.

It was thanks to the Prince’s diplomatic rewording of this bristling missive, and the prompt action of Washington in releasing the Confederates, that there was no war. But sympathy for the South continued on the upswing. By December 1863 the Southern Independence Association, formed in Manchester with the intention of forcing Parliament to recognise the government of Jefferson Davis, had chapters in almost fifty cities and towns across Britain and Ireland. In Parliament over seventy MPs were known to favour the South in contrast with only seventeen for the North.

Palmerston was only waiting for the right moment, either to offering mediation with a view to recognising the Confederacy, or taking such action unilaterally. Robert E. Lee’s retreat from Maryland after the Battle of Antietam in September, 1862 stayed his hand, but then came another dangerous moment for the Union. The Emancipation Proclamation, issued by Lincoln in the wake of Antietam, was widely condemned in Britain, not celebrated.

Remember, Lincoln had not abolished slavery, merely ‘freed’ the slaves who were held in those states beyond Union control. That is to say, in both the Border States and those areas of the Confederacy under the occupation of Union troops slavery remained firmly in place. Russell branded the act as a hypocritical and an illegal violation of the American constitution, which turned slavery itself into a “reward for loyalty.”

So slavery and declining sympathy for the Southern cause had nothing to do with the British reluctance to intervene. The real reason was, as Sebrell argues, quite simple; technical innovations in naval warfare, the introduction of both sides in the conflict of ironclads, had, by the summer of 1863, made the British Navy, hitherto the most powerful in the world, obsolete. A test was carried out on HMS Warrior, the most technically advanced the Royal Navy had, a huge ship itself partially ironclad, to see if it could withstand an onslaught by the squat and ugly little vessels whose prototype was the Monitor. Palmerston was told that every round from the sea monsters had penetrated the Warrior’s iron plates with ease. At that moment it was the Union, not the British, who ruled the waves. At that moment the Confederate cause in Britain was lost.

In the end all that survived was a certain nostalgia, evidenced by the free-standing statue of General Thomas ‘Stonewall’ Jackson, put up in Capitol Square in Richmond, Virginia in 1875, with funds provided by his English admirers, a reminder the politics were not quite as simple as the Lincoln statue in Edinburgh would suggest. 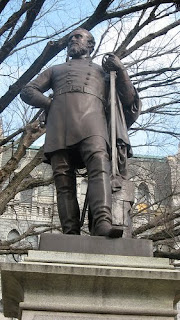