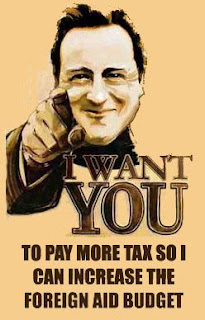 I wrote the following article last July on the My Telegraph blog site. I’m reviving it here in the light of recent developments.

This is the age of austerity, the age of fiscal realism. The mad Labour jamboree is over and the country has woken up with the most appalling hangover. Government departments are being asked to consider the unthinkable, reductions in expenditure of up to forty per cent. We are all going to be touched by this in one way or another, the price of past financial irresponsibility.

Wait a moment; I can suggest one possible way out: leave England; set yourself up as a Third World Country, claim poverty and apply for aid, doled out with far less scrutiny than income support. Yes, that’s the way to do it! One department, you see, is set to escape the Treasury scythe, that for International Development (DFID), whose budget is to be ‘ring fenced.’

How extraordinary it is when all sorts of activities important to the interests and well-being of the people of this country are under close examination that foreign aid is to escape. So, fewer schools in England; more schools in the Republic of Ismaelia (Don’t bother looking it up; it’s the fictional country in Evelyn Waugh’s Scoop!) Except when you look closely there are no new schools in Ismaelia, no, just lots of new jags and mercs. No matter; look on the bright side: it keeps the motor industry going.

Joseph Stalin is reputed to have dismissed the power of the Catholic Church by asking how many divisions the Pope had. Well, at my own peril, I have to ask just how many votes are there in overseas aid? And, in true rhetorical fashion, I will hazard an answer: none, not one. Oh people may say that they care about it; people may say that it’s the moral thing to do, to assist those in need, but nobody is going to vote for it; for we are all governed by self-interest to a greater or greater degree. In other words, this is an area where cuts could be made, savage cuts, with no political repercussions whatsoever.

I admire our new coalition government for the boldness of its actions, boldness far greater, I must confess, than I thought Liberal Democrats were capable of. But still there is a halo of self-righteousness, of do-gooding, of doing good unto those poor benighted foreigners. I’m glad that the government has had the sense to end the doles to China of all places, but much of the aid budget that remains is still used for the most worthless of causes.

The report in the Sunday Telegraph on the stupid wastefulness of so much foreign ‘aid’ was both maddening and revealing. By its own audit the DFID has concluded that a quarter of its projects do not achieve their aims. This means, in practical terms, that some £463million was effectively thrown away last year as ‘conscience money’, thrown away, in some cases, on things that did not actually exist, like the seven hundred ‘ghost’ teachers in Malawi. Then there is the money spent on school text books and improved classrooms in Kenya, except it wasn’t; it went into the pockets of corrupt officials in a project that has cost £55million since 2005.

From large to small this carnival of absurdity goes on. Did you know, for instance, that it cost you £190,991 on “strengthening the voice of older people in the Ukraine,” or almost £1.5million to support a wind turbine scheme on Pitcairn, an island with a population of fifty whose energy needs are met by a diesel generator?

If I ruled the world…sorry, if I ruled Britain not a penny of tax-payers money would be wasted on foreign aid, and I could not care less what the EU or UN targets are (the ring-fenced budget is set to go up). I’m not heartless, just practical. Foreign aid is little better than a scam that feeds corruption, inefficiency and waste across the world. There will, of course, always be instances where some form of emergency assistance is required, as with the Haiti earthquake, but these should be dealt with on a case by case basis. Unfortunately, given the present thinking, charity seems to begin everywhere but home.

As I say, I wrote this a year ago. All across the world, as it says in the latest Spectator editorial (Charity not Waste), governments have cut overseas donations because they cannot give away money they do not have. Not us. If you think aid goes to the poor, even to poor dictators, it’s time to think again. The chief beneficiary of our ring-fenced aid budget is India, a country that is able to afford a space programme, a nuclear programme and –wait for it – its own foreign aid programme!

We were faced with the absurd spectacle earlier this year of David Cameron pleading with the Indian government for a greater share in their economic boom whole handing out alms...or bribes. As our military budget is now being reduced a further £4billion is being extracted through the tax system for foreign largesse, leaving Liam Fox, the Defence Secretary, to point out in a leaked letter to the Prime Minister that it makes no sense at all for the government to pass a law binding itself to Labour’s aid targets. Yes, indeed, it makes no sense; it never made sense, wasteful foreign aid and wasteful foreign wars, cash and crusades. Will we ever be rid of the legacy of Blair?
Posted by Anastasia F-B at 15:32