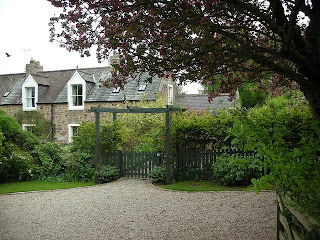 I flew up to Edinburgh early on Friday morning for a long weekend with some dear friends who moved earlier this year to a village called Dirleton to the east of the city. It was a trip I was so looking forward to, planned some time in advance. At the beginning of the week things were not looking so good because Vulcan’s hissy fit in Iceland was sending up so much dust and ash! In the end, I’m happy to say, it was all sound and fury signifying nothing.

It’s almost two years since I was last in Edinburgh, there for the International Festival. The city is as beautiful, and as dirty, as ever. The tram works on Princes Street are still not finished, but the thoroughfare is now far less of a mess than it was in August, 2009. This whole project seems to have been something of a local farce. Not only is the route shorter than planned but the scheme is also millions over budget, another massive waste of time and money that looks to be of minimal benefit to local people. I’ve yet to find a soul who has a good word to say about it, although I suppose I should have spoken to the foreign companies who were awarded the contract.

It’s not Edinburgh I want talk about; no, it’s East Lothian, a county in a part of Scotland I had never been to before. Dirleton itself is absolutely delightful. It’s not like any Scottish village I’ve ever seen, more English in appearance and general atmosphere, with a lovely central green. Close by is the most marvellous castle, parts of which date back to the thirteenth century. I adore romantic ruins and this is one is particularly charming, set in such beautiful gardens. 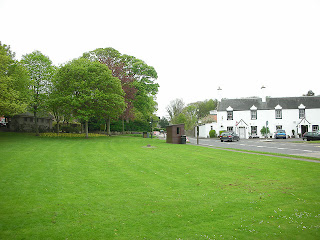 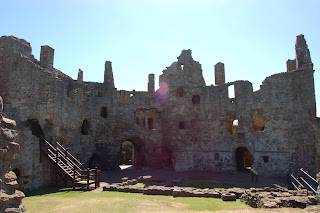 The other romantic delight is the nearby Archerfield House, originally founded in the late 1600s with substantial remodelling the following century. Once the home of Herbert Asquith, Prime Minister at the outbreak of the First World War, the place went in to sad decline after the Second, a fate reminiscent of Evelyn Waugh’s Brideshead. Happy to say it has been beautifully restored as a hotel adjacent to two splendid golf links. As guests of my friends we had a round on the Fidra on Saturday afternoon. My game, I regret to say, does not improve. Dash it all: I blame it on the wind! 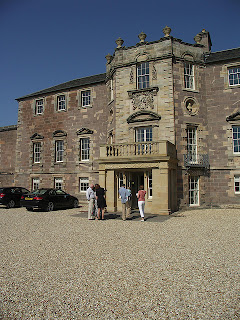 On Sunday, my appetite whetted by the Dirleton fortress, we did a spot of castle bagging. I was told there was one particular monument that was bound to appeal to me, situated on top of a rocky headland. This is Tantallon Castle, once the property of the Douglas earls of Angus. Actually it’s not at all a castle as traditionally conceived, a keep surrounded by four walls. No, Tantallon itself is in the shape of a huge single wall built to make use of the defensive possibilities of the sea cliffs. In a state of ruin it’s still a formidable and majestic place. Once besieged by the king of Scotland in person, it last saw action during the seventeenth century Civil Wars. Occupied by troops loyal to the crown, it was bombarded in 1651 by Parliamentary forces under the command of General Monck, Cromwell’s artillery chief. After the surrender it was left in a state of ruin, never again reoccupied. 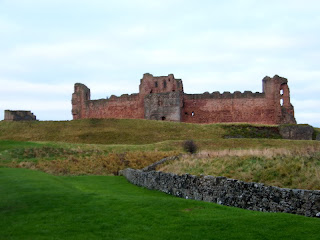 No, that’s not quite true. There is one inhabitant, a courtly gentleman dressed in a ruff, a style favoured in the late sixteenth and early seventeenth century. This is the Tantallon Ghost, last seen in a photograph taken in 2008, peering through one of the upper windows into the courtyard. Sadly he declined to show himself when I was there, no matter how much I willed it! 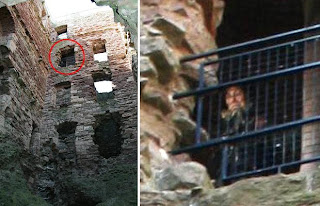 There are marvellous views from the grounds of Tantallon over the Firth of Forth and on to the nearby Bass Rock, the same kind of volcanic plug upon which Edinburgh Castle was built. Though this is the first time I’ve seen the Rock it’s not the first time I’ve visited it. No, I came through the pages of Robert Louis Stevenson’s novel Catriona, the sequel to Kidnapped. It was here that David Balfour, the priggish and self-important hero of the story, was kidnapped and confined for a second time. I remember it principally for the Tale of Tod Laprick, a story within a story, another eerie encounter, this time with a warlock and a shape shifter, one who takes the form of a gannet, in which the island abounds. 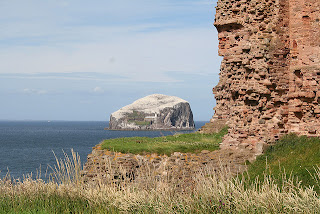 East Lothian is rich in the traditions and tales of witchcraft, no place more so than the seaside town of North Berwick, a Scottish version of Salem. It was a place I simply had to visit. It is here in the late sixteenth century, in the green by Saint Andrew’s Church, that local witches gathered, supposedly under the guidance of Satan himself, to cast spells against James VI, returning by sea from a trip to Denmark. The magic was ineffective, for despite the conjured storms the king made it safely to port.

What is certain is that a hysterical witch-hunt followed, in which hundreds of women were arrested, many confessing under torture to meeting Satan at the nocturnal sabbat. Among the accused was Agnes Sampson, also known as the Wise Woman of Keith, a local midwife and healer, who was even interrogated by the king in person. After gruesome tortures she was finally garrotted and burned as a witch on 28 January, 1591.

I’ve written about this before in a piece I called To Kill a King: the Story of the North Berwick Witches. Superstitious James may have been, the author of a work on demonology, but the persecution of these women, healers and innocent victims, had a clear political purpose, proving that the king, as a ‘man of God’, could defy the powers of Satan and the schemes of Francis Stewart, earl of Bothwell, his principal enemy and the real devil behind various conspiracies. I said a silent prayer in memory of Agnes and all the other victims of this tragedy.

From the crimes of the past to the pleasures of the present the weekend was rounded off with a super dinner at Archerfield House. I’m grateful to all concerned for a magical time amongst castles, ghosts and witches.
Posted by Anastasia F-B at 15:42