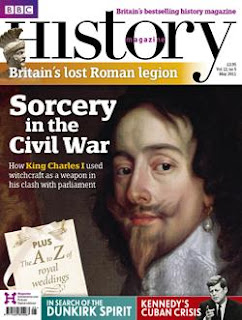 The May edition of the BBC History Magazine carries a portrait of King Charles I on the front cover. To the left of his head the text runs Sorcery in the Civil War, followed by smaller font announcing How King Charles I used witchcraft as a weapon in his clash with parliament.

This is bold stuff indeed, certainly enough to draw the curious inside the covers, anyone beguiled by the suggestion that a British king resorted to witchcraft, especially the only Anglican saint. It might be an excellent editorial hook but, if you do look inside, you are bound to be disappointed; for the whole thing is utterly misleading, grounds for possible prosecution under the Trade Descriptions Act!

The story is not about the king at all – it’s about a dog. Specifically it’s about Boy, the poodle that once belonged to Prince Rupert of the Rhine, the king’s nephew and the leading commander of the Royal cavalry during the English Civil War. In The Prince and the Devil Dog Mark Stoyle, professor of history at Southampton University, examines some of the myths that attached themselves to the poor beast. It has nothing at all to do with Charles but it’s still a jolly good tale about a tail!

Legends still cling to Boy even so far as the present day, some repeated by Terry Deary in The Slimy Stuarts, part of his Horrible Histories series, amusing interpretations of the past for children. There is even confusion over exactly what kind of dog Boy was. In Cromwell, a biopic starring Richard Harris, he is shown as a toy, as if a fighting prince would carry a lapdog into battle! No, though we can’t be precise, Boy was clearly some kind of hunting poodle, more akin to the standard breeds of today. In contemporary engravings he is shown on the ground just to the front of the mounted Rupert. 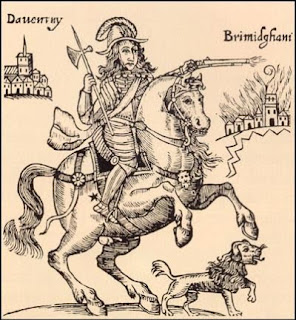 The interesting thing is that though pamphlets favourable to the parliamentary cause were quick to attribute a satanic quality to the king’s dashing cavalry commander, it was the royalists themselves who brought Boy into the picture in an attempt to poke fun at the superstitious gullibility of the other side. John Cleveland, a Royalist poet and polemicist, penned some verses in late 1642, claiming that the Roundheads all believed in Prince Rupert’s magical powers, and that Boy was his familiar spirit, the demonic shape-shifter that Satan grants to his acolytes. The concept was certainly familiar enough to those reared on traditional fears about witchcraft.

Cleveland had some fun with this, saying that Rupert taught Boy to cock his leg every time the name of John Pym, the leading Parliamentarian, was mentioned. It was a satire suggesting that the Parliamentary party were all superstitious fools, but it came to be regarded by subsequent generations of historians as a true insight into their beliefs, a myth that made it so far into modern English schoolrooms by way of the Horrible Histories.

Cleveland’s satire was such a hit on the Royalist side that by the beginning of 1643, as Stoyle says, they were even drinking toasts to Boy’s health. One anonymous Royalist writer went so far to compose a whole pamphlet about the dog, entitled Observations upon Prince Rupert’s White Dog Called Boy. It was written in the form of a letter, a parody of the canting style favoured by the Puritans, supposedly from a spy in Oxford, the royalist capital, who detailed Boy’s various ‘powers.’ To give a little extra bite the author claimed that Boy was not a real dog at all but a “handsome white woman” in the shape of a dog, a source of sexual favours for the Prince.

It was now that Boy really achieved prominence on both sides, the most familiar familiar England ever produced. It was a huge laugh, a piece of Cavalier condescension at the expense of their opponents, going so far to create a permanent image of the Roundheads. But poor Boy, or Girl, depending on your point of view, came to a sad end, all his powers notwithstanding. He was among the many Cavaliers who fell in July 1644 at the Battle of Marston Moor not far from the city of York. In revenge for the previous mockery Parliamentary writers wrote gleefully of his death.

But Cleveland, and Boy, have had the more lasting revenge, still colouring popular views of their unattractive opponents so far as the present day, still showing the Roundheads as literal-minded, superstitious and joyless fanatics. Well done Boy!
Posted by Anastasia F-B at 15:56