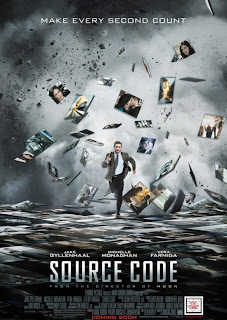 If I tell you a story about a dead man who tries to save Chicago from a nuclear holocaust, that he has only eight minutes to do so by invading the body of another dead man, a passenger on a train, that he has to repeat the same eight minutes time after time until he finds out who the bomber, the snake on a train, is before the whole thing blows up, except that time is not limitless, that there is a deadline in the living world which has to be worked against, you will conclude that I’m either crazy or that I’ve seen Source Code! We are not talking suspension of disbelief here; we are sending disbelief on a very long vacation. :-)

Yes, the plot’s ridiculous and the ending unbelievable but, my goodness, this movie works, an exciting, well-crafted, well-paced, well-directed and well-acted sci-fi thriller. It was prepared to dislike it in the way that I disliked Inception, another dream within a dream, but I was quickly won over, in large part to begin with by the superlative Jake Gyllenhall as Captain Colter Stevens, the man who unexpectedly finds himself on a Chicago-bound train, dead but not dead, living but not living. He has a sort of quizzical, bewildered quality, conveyed by expression as much by word, which carries one along to share in his confusion. Casting is so important here. A wrong move, a wrong actor, say Nicholas Cage, would only have heightened the absurdity of the plot.

Source Code was directed by Duncan Jones, who managed to escape his own alternate reality as Zowie Bowie, the son of the camp old pop queen David Bowie. I’m strongly tempted to avoid mention of Groundhog Day for the reason that just about every other review I have read has mentioned it. But that’s just the thing – this is a version of that time-loop movie, a scene played again and again until the right outcome is achieved. Inception, Groundhog Day and even The Matrix, they are all there, except that Source Code manages to absorb their influence while creating something divertingly original.

Don’t ask me to explain what the actual source code is because I can’t. I’ll leave that to Dr Rutledge (Jeffrey Wright), the mad scientist and even madder bureaucrat who heads the team that guides Captain Stevens on his mission; you will perhaps make better sense of his ramblings than I could, not being particularly sympathetic to scientific mumbo-jumbo…or bogus metaphysics!

The mission begins suddenly and dramatically, with Stevens coming to consciousness opposite a woman on a train, Christina (Michelle Monaghan), who clearly knows him though he hasn’t a clue about her. That’s the start of his first relationship. His second in the real world, the living present as opposed to the dead past, is with Captain Colleen Godwin (Vera Farmiga), his mission controller, with whom he interacts through a computer screen, himself being confined in his non-train moments to a Major Tom Tin Can (Bowie!)

Both of these interactions actually work very well, that with Farmiga, who manages professionalism and compassion with equal ease, in some ways even more effective than that with Monaghan, who supplies the love interest. Yes, one simply can’t get away from that, and the more the peripatetic captain returns to the past, to the dead world, the more his feelings for Christina grow by degrees. He is looking for a bomber; he discovers his bomber and discovers himself, creating in the process a new life beyond death.

This is a movie about paradoxes and metaphysical puzzles, a movie about time, the greatest paradox of all. It’s a movie about alternate realities: the past may not be changed but perhaps it can be diverted to other ends, like a train moving down a siding. In the end Stevens, actually now one Sean Fentress, a history teacher, successfully past those last eight minutes and free from the train, walks with Christina in Chicago’s Millennium Park, there to see a new reality, distorted in a massive stainless steel sculpture of a cloud. This is such stuff as dreams are made on.

Time present and time past
Are both perhaps present in time future,
And time future contained in time past.
If all time is eternally present
All time is unredeemable.