March of the Women 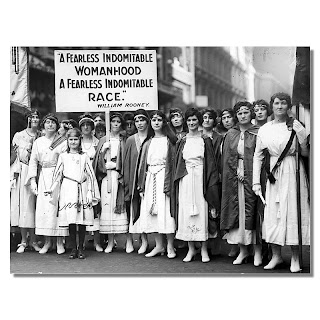 In January, 1911 Votes for Women, the paper of the Women’s Social and Political Union, an organisation campaigning for female suffrage in Britain, announced a new song which it described as a hymn and a call to battle. This was March of the Women, composed the previous year by Ethel Smyth. That same month it was given its first public performance by the Suffrage Choir in Pall Mall, introduced by Emmeline Pankhurst, head of the WSPU, as the suffrage movement’s new anthem.

I love it. It’s one of the most stirring songs ever written. If I had been alive then I would have been a militant suffragette alongside Emmeline and Cristobel Pankhurst, two of my all-time heroines. Yes, I would have sung those words at the top of my voice, those wonderful, heroic words;

Shout, shout, up with your song!
Cry with the wind, for the dawn is break-ing;
March, march, swing you a-long,
Wide blows our ban-ner, and hope is wa-king.
Song with its sto-ry, dreams with their glo-ry
Lo! they call, and glad is their word!
Loud and lou-der it swells,
Thun-der of free-dom, the voice of the Lord!

Long, long -- we in the past
Cowered in dread from the light of heaven,
Strong, strong -- stand we at last,
Fearless in faith and with sight new given.
Strength with its beauty, Life with its duty,
(Hear the voice, oh hear and obey!)
These, these -- beckon us on!
Open your eyes to the blaze of day.

Comrades -- ye who have dared
First in the battle to strive and sorrow!
Scorned, spurned -- nought have ye cared,
Raising your eyes to a wider morrow,
Ways that are weary, days that are dreary,
Toil and pain by faith ye have borne;
Hail, hail -- victors ye stand,
Wearing the wreath that the brave have worn!

Life, strife -- those two are one,
Naught can ye win but by faith and daring.
On, on -- that ye have done
But for the work of to-day preparing.
Firm in reliance, laugh a defiance,
(Laugh in hope, for sure is the end)
March, march -- many as one,
Shoulder to shoulder and friend to friend.


Such brave words for such brave women, women who fought so tenaciously in the face of hostility and hardship for something that we now consider to be a fundamental right. I’m no great enthusiast for specifically female causes, or for the forms of women’s liberation that emerged in the States from the 1960s onwards, but the campaign over the suffrage was something different, something all women could feel strongly about, no matter their class, politics or religion. Oh, bliss was in that dawn to be alive but to be young, and a woman, was very heaven.