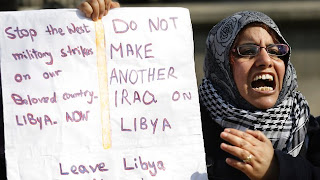 I wonder if someone can explain the rationale behind the foreign policy of this country at the moment, because I have no idea what’s going on or what our objectives are. I was tempted to write to William Hague, the Foreign Secretary, to ask if he could provide some light, a futile exercise, I concluded, because he gives every appearance of understanding even less than I do.

The problem is this. Here were are, ranged alongside France and the other idiot powers in NATO, attacking Libya day after day, with no conceivable end in sight. Oh, but it’s all about ‘protecting civilians', the cry went, all in pursuit of the wholly admirable UN Resolution 1973, fully supported by other Arab powers, fully supported by Syria, a power now busily murdering its own citizens, a power, incidentally, that has been lobbying for a seat on the UN Human Rights Council, with the backing of the Arab League.

So, let me get this straight. We are attacking a country that had renounced terrorism, a country that had also abandoned its nuclear project, all in the name of human rights and ‘protecting civilians.’ Clearly there is nothing cynical at work here, no considerations of our own self-interest, no notion of realpolitik. It’s all about moral rectitude, all about doing the right thing, is it not?

So, what about Syria, what about a country with a far more savage record on human rights abuses than Libya, a country which actively encourages terrorism, a country that has links with Hezbollah, Hamas and Iran? Vague Hague is threatening President Assad with ‘sanctions’, that’s what.

It’s the simple-minded stupidity that I find most unsettling, that we walk into these obvious traps without the least understanding, not the way one expects a government to behave, a government with any strategic or political sense. Set the question of resources to one side, we are attacking Libya because we can, with no heed for the possible consequences; we are effectively ignoring Syria because we dare not do anything else, other than issue Hague’s vague threat of ‘sanctions.’

I’ve said this before but this laughable moral imperialism, this doctrine behind “responsibility to protect”, is shot through with glaring contradictions, act in one place, ignore another; ignore Syria, Bahrain, Darfur, Zimbabwe, the list just goes on and on.

Cameron and Sarkozy, that comic double act, decided to act against the Colonel because they thought the Colonel would be a push over, let’s be absolutely frank about that. The ridiculous Sarkozy wanted to bolster his popularity ratings in a country anxious that it is no longer able to ‘get it up’ on the world stage. That’s a motive, I suppose. What about Cameron, what was he out to prove? Oh, yes, I know – he is the heir to Blair.

Intervention in Libya is even worse in some ways than the Iraq fiasco. No account was taken of the fact that Gaddafi has considerable support in the west of the country, something I’ve alluded to before. Beyond that there is an ancient fracture between Tripoli in the west and Cyrenaica in the east, an historic division we have merely compounded by precipitate action based on ignorance. We found a civil war; we have ensured that civil war may now be endless. If the stupidity and the hypocrisy behind our actions in the Middle East is obvious to me it will be obvious to so many others. Afghanistan, Iraq and now Libya, just how many more of these expensive and pointless Pyrrhic adventures can this country take?
Posted by Anastasia F-B at 15:52