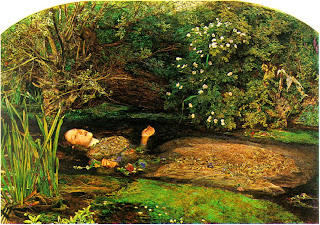 The first story that caught my eye yesterday morning when I glanced through the days reports was one concerning Shakespeare, still making the news hundreds of years after his death! Actually the story concerns one Jane Shaxspere (sic), who was found drowned when she was just two years old, her body floating in a pond in Upton Warren in Worcestershire, just twenty miles from where her near namesake lived in Stratford.

The details of Jane’s death were discovered by historians from Oxford looking at sixteenth century coroners’ reports. She died in 1569, when Shakespeare was approximately five years old, accidentally falling into the pond while picking marigolds. The suggestion is that she was the bard’s cousin. It’s certainly possible, given the near similarity of their names and the proximity of their locations, at a time when people did not travel much, and extended families could be found across a fairly limited area.

It’s further suggested that Shakespeare, many of whose characters and plots were based directly on his own experiences, may have used this tragedy as the basis for the death of Ophelia in Hamlet, one of the most haunting scenes in his whole canon. There the Prince’s former lover, driven mad by the death of her father, falls into a brook, floating for a time before being dragged down by the weight of her saturated clothes;

There is a willow grows aslant a brook,
That shows his hoar leaves in the glassy stream;
There with fantastic garlands did she come
Of crow-flowers, nettles, daisies, and long purples
That liberal shepherds give a grosser name,
But our cold maids do dead men's fingers call them:
There, on the pendent boughs her coronet weeds
Clambering to hang, an envious sliver broke;
When down her weedy trophies and herself
Fell in the weeping brook. Her clothes spread wide;
And, mermaid-like, awhile they bore her up:
Which time she chanted snatches of old tunes;
As one incapable of her own distress,
Or like a creature native and indued
Unto that element: but long it could not be
Till that her garments, heavy with their drink,
Pull'd the poor wretch from her melodious lay
To muddy death.


Hitherto academics believed that the inspiration behind this scene came from the death of Katherine Hamlet, a friend of the Shakespeare family, who fell into the River Avon and drowned when she was sixteen years old. It was believed by some at the time that she had committed suicide because of the breakdown of a relationship. Ophelia in Hamlet is certainly mad, though it’s uncertain if she committed suicide or not, at least by Queen Gertrude’s account to Laertes, her brother, softened possibly to spare him the full horror. In the play the church is under no doubt that she took her own life, denying her a full Christian burial.

The whole thing is certainly quite intriguing, though a precise link is almost certain to prove elusive. Though the researchers have enthusiastically embraced little Jane, there is no need for the tragedies to be mutually exclusive. The drowning of Katherine may very well have resurrected memories of the earlier event, linking possible death for love with death for love of flowers.

The researchers are looking for further clues that might possibly identify Jane as the original Ophelia. Dr Emma Smith of the faculty of Language and Literature at Oxford has said that “It’s interesting to think of Ophelia combining classical and Renaissance antecedents with the local tragedy of a drowned girl.” Yes, it is, though I would hazard that it’s never likely to be much more than that. But it’s comforting to believe that Jane, and Katherine, have been transfigured and immortalised in great art.
Posted by Anastasia F-B at 16:02