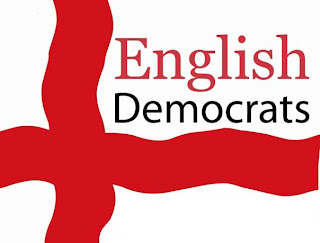 I was recently asked if I would look over the manifesto of the English Democrats Party (EDP). Well, now I have, a version that I downloaded from their webpage. I assume there is nothing later, though the document is clearly more than a year out of date, insofar as it makes reference to a Labour government dominated by Scots. Still I imagine little has changed in the way of the party’s fundamental aims.

I have to say that while I was certainly aware of this party’s existence I knew very little about it, other than it was a sort of English version of the Scottish National Party. The manifesto certainly confirms that, a central aim being the creation of a Parliament for England in the fashion of the Scottish Parliament and the Welsh Assembly.

It seems to me that the EDP exists thanks to two things: the as yet unanswered West Lothian Question, namely why are Scottish MPs allowed to interfere in English affairs when English MPs have no equivalent right, and Tony Blair’s botched constitutional settlement, which left England in a kind of political limbo. To use the jargon, the party was born of a perceived democratic and constitutional deficit. It’s the English Parliament party; it will always be the English Parliament party. The problem is that this would seem to be a basis too narrow to allow it ever to make a serious political breakthrough.

The manifesto is about so much more, of course. There is a broad range of policies, much of which I can agree with without reservation, particularly on withdrawal from the European Union and the ending of mass immigration. There is also a highly commendable critique of political correctness and multi-culturalism, both of which I despise with a passion. I particularly liked the passage dealing with the background of the ghastly European Union, or the Franco-German Union, some simple facts that people need to be more aware of;

European integration, as conceived by the Frenchman Jean Monnet, had the aim of tying Germany into a network of political and economic links with France and other European states so that it would be impossible for Germany to go to war with them. That was by no means the only motivation for seeking ever-closer political and economic union. The interests of Germany and France came together in the peculiar circumstances following World War II. Advantage could be gained for both by combining a post-war German economic revival with French political and agricultural dominance. Germany gained a secure market for its manufacturing industry and France gained a protected market and financial support for its agriculture. In addition, France obtained privileged access to the European market for its colonial produce, and took the lead in building European institutions on the French model – centralised and bureaucratic. The aim from the beginning was to enmesh the states of Europe in an economic, political and military union from which they could not break free. That goal was, and still is, considered more important than the democratic nicety of explaining the goal to the electorate and seeking its approval.


For me this is the key; this bureaucratic tyranny is a far greater danger to our liberty, our sovereignty and our identity as a nation than the absence of a dedicated English parliament. But of course the EDP can’t make too much of this particular platform, for the United Kingdom Independence Party more or less has the ground fully occupied.

There are aspects of the manifesto that I am not convinced by. I do not want ‘reform’ of the House of Lords; I do not want an elected second chamber, the Liberal Democrat agenda. There are the usual bland nostrums about the National Health Service, the sacred cow of our national life, long overdue for an appointment in the abattoir! There is a rather vague nod towards policies on green energy, something else I’m deeply sceptical about, as I made clear in Whistle down the Wind. The EDP wants referenda as a feature of our national life on the Swiss model, something else I reject, something that would inevitably lead to voter fatigue and the domination of tireless and self-interested minorities.

Overall it was an interesting and unobjectionable read but it’s a policy for fragmentation which might very well suit the aims of the Euro-rats in Brussels (I wrote Eurocrats. I gave way to my spell checker for this more apt description!). I confess I feel far more English than British; I feel that if the Scots and the Welsh want to go their separate ways then so be it; but I do have a residual attachment to the Union, so much greater than the sum of its parts.

The Scots, I am convinced, will never vote for complete independence. The English, I am equally convinced, will never vote for yet another layer of government. Westminster is our Parliament; it has been for centuries. I agree, however, that it’s not working as well as it might, that something has to be done to ensure that English laws are made by English legislators and only English legislators.
Posted by Anastasia F-B at 15:46