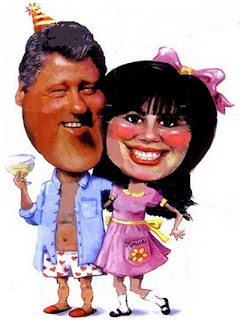 There is no justice; life is just so unfair. I know that, you know that, but sometimes it frustrates me so, looking at things from a historical perspective. I wrote recently about Richard Nixon, a man I consider to be one of the most intelligent presidents that America has ever had, inspirational and imaginative. Yet his presidency was systematically destroyed on the flimsiest basis of all.

Now, I turn to Bill Clinton, one of the worst, a man who degraded the office – literally – of president, a chief executive tainted by moral depravity, a proven liar who still managed to survive two full terms in office. He’s a Democrat and I generally find Democrats no more appealing than the British Labour Party, but as a representative of this socialist party he represents the nadir, worse even that that priapic hypocrite JFK, and that really is something.

He’s now pushing on a bit; I guess I should try to be a little more charitable to ex-President Clinton, who, in his dotage, has taken to remembering the good old times in Times Square, remembering just how ‘romantic’ it was before New York’s most famous thoroughfare was cleaned up.

Those where the days alright, the days of Clinton’s youth, the days of pimps, hookers and druggies; a fascinating time. There he was up from Arkansas, a kind of political version of the Midnight Cowboy, watching as a prostitute approached a man in a grey flannel suit, loving the downbeat seediness of it all.

Seediness, yes, that was the leitmotiv of the whole Clinton presidency, a man who turned the Oval Office into his own version of Times Square, a place of blue dresses and stains, a place where he did not have sex with that woman, another insight into this man’s topsy-turvy world. It’s such a pity that he did not invite Dustin Hoffman to join his administration, just to complete the picture, in the guise of Enrico “Ratso” Rizzo, of course, perhaps as Secretary of State.

I shall finish with a Clinton joke, one told to me by a good friend of mine from Georgia. It goes like this:-

Hilary –sadly – has died and gone to heaven. There she is in Saint Peter’s office, the man at his desk. Behind him, reaching out to infinity are clocks, clocks and clocks.

“Well, Saint Peter replies, “for every human soul there is a clock, set at twelve noon at birth. The hands only ever move if a person tells a lie. See, here is Mother Teresa’s, still at twelve; she’s never told a lie in her life. There is George Washington’s, standing at five after; he’s hardly ever told a lie.”