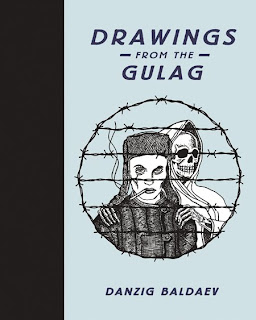 An important new book was published earlier this year. It’s called Drawings from the Gulag, containing an extraordinary and disturbing collection of sketches by one Danzig Baldaev, a former official in the NKVD, Stalin’s security police. I was fully aware of the horror of the Soviet camp system from the work of people like Alexander Solzhenitsyn and Varlam Shalamov among others. But these graphic drawings give the sheer savagery of it all a terrible immediacy.

Baldaev himself has an interesting history. The son of a rich Mongolian intellectual, he was born in 1925 in the south-east of the USSR. Like so many others, his father was arrested during the Great Terror of the 1930s, while he and his sister were consigned to an NKVD orphanage, set up specifically for the children of ‘enemies of the people.’ One does not have to imagine too hard to conjure up the treatment children received in places like this.

Later, after leaving the orphanage, Baldaev was ordered to become a guard in one of the NKVD labour camps. To amuse himself he starred to sketch the various tattoos displayed by the criminal fraternities. On learning of this his superiors encouraged him to continue, believing such designs supplied valuable intelligence on the links between inmates and the criminal underworld outside the camp system. Baldaev was therefore given permission to travel from camp to camp, recording tattoos along the way. 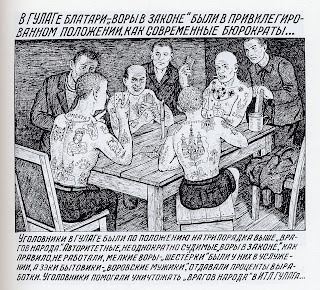 Unbeknown to his superiors he was compiling a secret dossier, detailing the various outrages that were such a feature of the whole gulag system. His sketches show scenes of torture, degradation and execution, by the NKVD as well as that practiced by prisoner upon prisoner. There are scenes of sexual torture, of mass rape, of an axe being raised as criminals make ready to decapitate one of their fellows. For once the cliché applies: an image really is worth a thousand words. 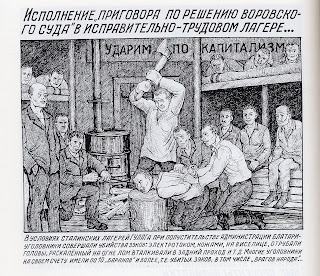 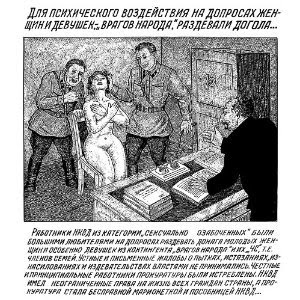 Compared with the flood of information about the Nazi camp system, including movies like Schindler’s List, so many people in the west are still comparatively ignorant over the horrors of the gulags. So far as I’m aware the only English-Language film featuring the Soviet camp system is the British adaptation of Solzhenitsyn’s One Day in the Life of Ivan Denisovitch, made in the early 1970s. Hollywood has never tackled the subject. 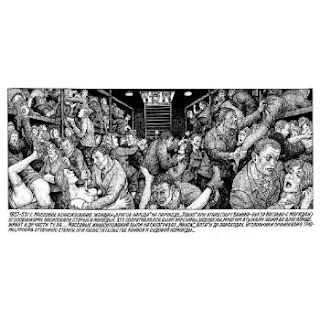 I discovered from a review article by Olrando Figes in The Times that a new movie touching on Stalin’s camps is to be released this month. The Way Back is really about a prison break, a highly improbable one at that, only featuring camp life in a fairly brief slot at the beginning. There is still something lacking here, something revealing about our lack of interest in the mundane horrors of the Soviet camp system compared with the grotesque horrors of the Nazis. Figes makes an excellent point:

We do not feel as close to Russian peasants as we do to Western European Jews. We’re not sure that the Russians are “like us” at all. Maybe that’s why there hasn’t been a film to engage us in the tragedy of the gulag. It is in part a legacy of the Cold War. Perhaps we feel that the Russians brought their suffering on themselves – victims of a revolution that went wrong. Or perhaps, in some former left-wing quarters, we still cling to the old romance about the Soviet Union that puts its victims out of sight – a rose-tinted view of the revolution that can be seen in Reds (1981), Warren Beatty’s love song to Bolshevism, which still colours views in Hollywood. In 2008 it was voted one of the ten best epic US movies by the American Film Institute.

It is, I think, time for a new song, a song to all the victims of Bolshevism, a song that will help us understand the terrible human suffering involved; to understand that a million deaths is a million tragedies. 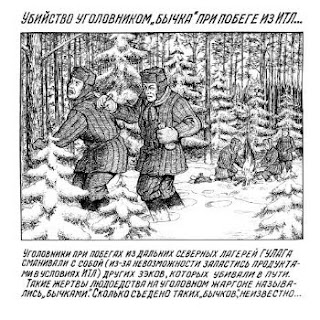 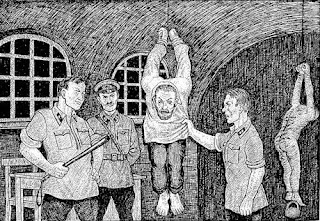 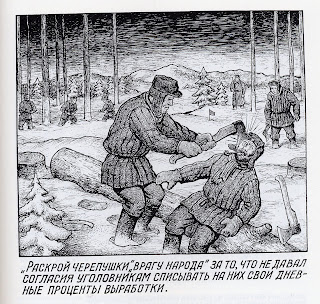 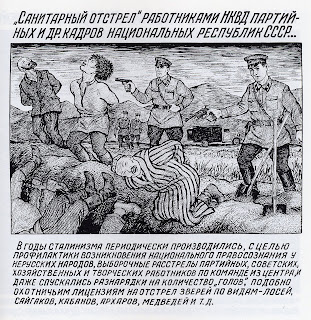